— The peak of US airline employment was in 2000, with more than 650,000 Americans working for an airline. Since then, based on government statistics, US airlines have cut nearly 150,000 employees.

— More than 30 percent of US airlines filed for Chapter 11 bankruptcy protection during the 2000-2010 decade (i.e., 30 percent of airline shareholders were wiped out).

— Many new jobs for pilots will be with “state-owned airlines”; it is forecasted that, “by 2029, 68 percent of air traffic volume will be from the emerging economies in such countries and regions as Asia, Brazil, India, and the Middle East.”
Read more: http://www.businessinsider.

As I mentioned in a previous e-mail, the state of the US airline industry is evidence that the 9/11 terrorists may have achieved their goal to wreck the American economy by banking on the American political establishment’s overreaction to their attack, driving the American economy into the gutter. The death of Bin-Laden does not alter that, nor does it change the fact that as regrettable and horrid as it is, his strategy seems to be working. American conservative leadership (Republican and Democratic alike) will continue to blame it on the unions, food stamps, illegal immigrants, the civil service, or almost anyone else other than themselves.

In January 2009, President of the United States of America, George W. Bush invited then President-Elect Barack Obama and former Presidents George H.W. Bush, Bill Clinton, and Jimmy Carter for a Meeting and Lunch at The White House. Photo taken in the Oval Office at The White House. (Photo credit: Wikipedia)

The liberal wing of the Democratic Party continuing their tradition, extending back about 50 years, of turning on the person they helped elect President because he failed to deliver on their favorite single issue, thereby more often than not assuring his defeat, have turned on Obama. Despite shepherding through a balky Congress the most progressive agenda since Lyndon Johnson, the liberal élite are furious at learning that Obama actually is the liberal leaning centrist he said he was during election and not the fire-breathing leftist ideologue they imagined him to be in their mad rush to defeat a representative of the previous administration that they helped elect and then abandoned for committing the unforgivable sin of political realism.

On the right, on the other hand the Republicans seem to almost always forgive their leaders for recognizing political reality or, god forbid, actually doing something right among the stream of disastrous policies that so please their rank and file (e.g., Nixon on the Environmental Quality Act, Reagan surprisingly on Social Security). Only George W. Bush seemed bereft of a single socially positive domestic policy initiative and yet despite the almost universal recognition among even those on the right that his policies were a disaster for the nation and his Party, virtually no significant criticism of either him or his policies emerged from the conservative press.

The liberal journalist icon , Frank Rich in the NY Times recently has written:

“The president’s failure to demand a reckoning from the moneyed interests who brought the economy down has cursed his first term, and could prevent a second.”

Never has a conservative journalist so blithely abandoned their leader because of a failure of ideology or policy. If that were not so, George W. Bush would never had won a second term.

Vittorio and I continued on to Barcis, a picturesque little town by a lake nestled in the mountains at the edge of the Dolomite. We walked about a bit then returned home.

On Sunday, we returned with Hayden. Vittorio’s band, “The Tamai Friends of Music” was featured at the festivities accompanying rowing races on the lake at Barcis. I had bought Hayden a tin whistle in Venice that he happily and forcefully played along with the band until the conductor asked him either to stop or get up on the stage and join them.

A few days earlier, Nikki arrived at the farm. He had a couple of days off between flights. We took the train to Venice specifically to see the model boats exhibited at the naval museum at the Arsenale. Of course, when we arrived it was closed. Otherwise Venice was, well Venice; the food was awful and the people obnoxious but the City looked wonderful.

We had lunch (actually just snacks and wine) at the only place I found where the proprietor appeared to welcome us. As could be expected she was not Venetian but was a Brazilian immigrant married to an Italian. I drank too much wine and struck up a lively conversation with two English spinsters sitting at the next table. (To those feminists among us, there lacks a more suitable description to this throwback to those fiercely independent Victorian woman, usually from England, who strode the world in pursuit of social justice, striking fear into any malefactors of moral impropriety.) One had recently moved to Treviso and the other was visiting her from her home in London. They both were committed socialists, but agreed to support my candidacy for President. Upon leaving the café a little tipsy, I walked into the easel that held the osteria’s menu sign and broke it to bits.

If you would chance to be in Venice in the future, the name of the place is Osteria alla Ciurma at S. Paulo 406 Rialto, calle della Galeazza just far enough from the Rialto to allow its food to be edible. Do not mention that you know me. However, if the spinsters are there (it is their favorite place in Venice) say hello to them for me.

On the way back to the office Vince asked Ray how he knew what to do about the photographer and about the note.

“Before I became a legal sec… er administrative assistant, I worked for a private eye.”

“No kidding, who did you work for?”

“Fat Al! You worked for Fat Al? How come I did not know about it and why didn’t you tell me when I asked you to assist him?”

“I thought you knew. It was on my resume. I guess you did not have a chance to look at it.”

When they arrived back at the office Nina was waiting with a grim smile playing at her lips. “The Great One arrives tonight. She wants to meet with you tomorrow after finishing some meetings with clients. She suggested dinner at “TWO”.”

Of course, “TWO” was one of the most expensive restaurants in town, lighting too dark to see across the table and portions so small one had to stop and get a hamburger on the way home or risk starving before morning.

The Great One is how most people in the firm referred to the managing partner of the Brussels office. Arabella Le Grande is her actual name. A few that know her well call her Arrogant Bella.

“Also,” she continued not giving him time to groan, “David is in your office waiting for you to return. It’s terrible about Mrs. Coign everyone is very upset. First Mr. Coign then his wife. What a shame.”

William “Big Bill” McWilliams had just exited his chauffeur driven Bentley and started across to sidewalk towards his office building on Steuart Street in San Francisco when he was blindsided by another pedestrian who obviously was not paying attention to where she was going.

“Dammit, why don’t you…” he began before noticing that his assailant was a most beautiful young woman almost as tall as he was, wearing a very short skirt, large hoop earrings, and a scoop necked blouse exposing the promise of large soft rounded breasts below. Seamlessly he lowered his voice almost one octave to produce that sonorous sound that earned him the additional sobriquet among some as “Golden Throat”. “…ah, excuse me miss, it was all my fault, I should have been more careful. Let me make up for my clumsiness by buying you a cup of coffee”.

“No,no” she said in her deep throaty sexy voice, “It was all my fault. I was in too much of a hurry for my meeting. I wasn’t looking where I was going. I am in a bit of a hurry right now.” She looked at him for a moment with her calm eyes, glanced at the Bentley that had driven off and now was awaiting the change of signals at the stop light on the corner, smiled a broad sparkling smile and added, “But I would take a rain check on that coffee.”

Big Bill, ego aflame, reached into the left hand pocket of his suit jacket where he always kept a few of his overwrought business cards containing besides his name and his office number clear evidence that he was the owner of several businesses, plucked one out and handed it to her, “Here is my number. Please call. I will look forward to it.”

She took the card, smiled, saluted him with it and walked off.

He watched her for a moment, then turning off his smile, walked into the small elegant lobby of the “McWilliams Building.”

One evening before going to sleep I asked Hayden if there was any questions he wanted answered. He said, “Yes, I know I come from my mommy and she came from her mommy and her from her mommy (Apparently his mother left him with the impression that males have no role in the procreation process, being restricted only to working and providing money.), but,” he continued, “I don’t understand where it all ends.”

So I launched into a lengthy explanation of evolution and modern scientific thought on cosmology.

When I finished he said, “I think I understand. But, what I really want to know is if this was before or after God died?”
b. Testosterone Chronicles:

“Young male CEOs appear to be combative… [as] a result of testosterone levels that are higher in young males. Testosterone… has been shown to inﬂuence prospects for a cooperative outcome of the ultimatum game. Speciﬁcally, high-testosterone responders tend to reject low offers even though this is against their interest.”
Source: Social Science Research Network

(Combative or bags of nuts?)

(1) I guess I have to apologize for something. So, I apologize for my continued political harangues. Unfortunately, whenever I hear those bells of Boston ringing, I just want to run and warn the British that the Colonists are coming to shoot them for trying to take away our guns. Thankfully, our four fathers (Washington, Jefferson, Lincoln and the good Roosevelt) worked tirelessly to eliminate slavery at the founding of our country. Ah, I just cannot help myself.

(2) According to Wikipedia, the town referred to in the previous post as Veneto later changed to Vittorio Veneto in honor of the Italian victory there in WW I was actually named Vittorio with the Veneto added to commemorate the victory.

The question for the 2012 election is could any candidate running for the Republican nomination for the Presidency do as well for the right-wing of their party on either issue as the incumbent?

Hayden, flute-less in Barcis, watching “The Tamai Friends of Music”:

The boat races on the lake at Barcis: 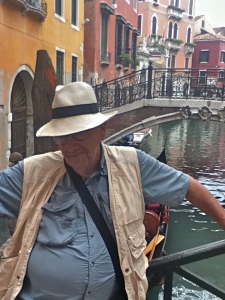