When I abandoned the seven or eight containers of the stuff I had accumulated over the years before setting out with a single suitcase for Thailand, I was especially saddened about my loss of some things like artworks, collections, photographs and things like that. It was not the first time I had left everything behind and set out for a new life or to a new continent. All I could salvage were a few things that fit into an outside pocket of my suitcase; my daughters PhD thesis, a photograph or two, Fred Harris for President Handbook that I drafted during his presidential campaign in the mid 70s and two diaries from the early 60’s.

I do not know how these diaries survived my many migrations, but they did, always lying a few feet from my bed, unread and unopened but for a moment or two every decade or so. Last night I opened them again. I was looking for something I thought I had written in these diaries, but it was probably in a third diary that was lost in the latest move. The remaining two were paper back book sized, one with a red cover and one with brown. They dated from 1963 and 1964, my first two years in law school and mainly recorded my anxiety with school and my relationship with the woman who became my first wife. They are mostly embarrassing, at times amusing and now and then poignant. Since I have grown bored with most of the subjects I write about and after all, this whole thing is nothing more than a strange extended memoir, I decided to include some excerpts.

The first is a weather report dated Wednesday April 15, 1964:

“Today’s weather: It did not snow.”

On April 26, 1963, I recorded part of a letter written by a young english woman, Val, to her room-mate Maria who remained living in New York after Val returned to England. Val and Maria had worked one summer at my uncle’s restaurant on Cape Cod. I met them there and we became close friends. They moved to New York City where they roomed together until Val left.

“Joe was there with flowers. He more than anything else made me sad in leaving America. He personified all that was good and fun and enjoyable in America.”

March 20, 1964. I had recently begun clerking at the then prestigious Wall Street Law firm of White and Case, a firm that at that time I would be unable to join as an attorney after I graduated law school because of my ethnic background and religion and even if I could, I could never hope to become a partner. Thirty years later, the firm had become just another big law firm struggling to compete with hundreds of others, many larger and more effective and with fewer barriers to entry. They were struggling. By then, I had a sizable book of business and they begged me to join them as a partner.

“I met Mr. Mannix (a senior partner) at work today. He is very pleasant and made me feel very relaxed. He walks with a limp and has a daughter named “Dee-Dee.”
I feel miserable and lonely.
The Telephone Company is going to cut off my service.
My studies are going poorly.
I have no money left.
I took everything out on poor Jeanne (my then girlfriend and future first wife).
My feet smell.”

A few days ago Nepal authorized the gender identification options on all official documents to include, Male, Female and Other.

Why do we need classifications for race, gender, nationality and the like? If you are an individual and other individuals have rights, you should also have the same rights as they do.

2. But you do not understand…:

A few months ago I mentioned the Thai Transportation Secretary whose house was burgled of over $600,000 dollars of unaccounted for cash (rumors circulated that the actual amount may have been more that 5 times what was reported). The minister originally claimed only about $100,000 was stolen. When it was revealed that it was much more than that, the minister explained that it was money his daughter received from her father in law as a wedding present that was in his possession for safe keeping. It was also revealed that his ministry recently awarded a substantial contract accompanied by rumors of large sums of lubrication (tea, in Thai) money received by unknown parties.

Well, the government now has seized the money (already in their possession) pending charges that the minister was “unusually wealthy.” The minister resigned his position following the governments action.

A law against “unusual wealth;” wouldn’t you like that here? Once a year those with sudden increases in wealth would be hauled before the court to explain how they did it. This could be a good thing; to really know how they did it. After all, we know from innumerable scientific studies that it has little to do with talent.

It was reported recently that property values in key cities of the world declined by and average of .4% this past quarter. This is the first decline since the 2008 economic collapse.

It is a pretty good indication that money or wealth continues to disappear from the world economy. The determined insistence of bond holders that their investment expectations not be diminished through inflation or default will inevitably see their expectations crushed by economic collapse. When will they understand? They made a bet. They lost. Accept it. Its time to start over.

The general and now member of the Thai legislature that led the coup that ousted prime minister Thaksin the Terrible, exiled fugitive brother of the current Prime Minister Princess LuckyGirl has introduced a bill that, in the name of national reconciliation, will offer unconditional amnesty to all parties involved in the coup and following several years of turmoil. The legislation would allow the exiled Prime Minister Thaksin the Terrible to return to Thailand with all changes and convictions dismissed and his confiscated fortune restored. Those that injured or killed during the Red Shirt protests last tear would also be exonerated. The leader of the opposition party and previous Prime Minister Abhsit the Unready would have all charges pending against him dropped also.

Abhsit the Unready and his party opposed the amnesty because it would allow Thaksin the Terrible to return to Thailand. The Red Shirts also oppose it because it would allow those accused of killing Red Shirt protestors during the demonstrations a few years ago to go free. Princess LuckyGirl, when asked about her position on the bill said that she had none since it is a legislative matter.

It sort of reminds one of the debt ceiling debate in the US, doesn’t it.

According to a report sent to me by Gary, there are more Facebook users in Bangkok than in any other city in the world. According to a BKK based social media commentator, “Facebook in Thailand for many people is the Internet.” “They watch videos, send messages and communicate with friends, play games. It replaces the browser.” He claims that Thais see Facebook as a utility and not as a trend.

A. Bankers in religious history:

Scorn for moneymen has a long pedigree. Jesus expelled the money changers from the Temple. Timothy tells us that, “the love of money is the root of all evil.” Muhammad banned usury. The Jews referred to interest as neshek—a bite. The Catholic church banned it in 1311. Dante consigned moneylenders to the seventh circle of hell—the one also populated by the inhabitants of Sodom and “other practisers of unnatural vice.”

An economics book used in some fundamentalist christian private high schools in the US holds that the Antichrist — a world ruler predicted in the New Testament — will one day control what is bought and sold.

Does this all mean that the CEO of Morgan Stanley, Jamie Dimon (Demon? Spell check says so.), could be the anti-christ and may practice “unnatural vice?”

Out of the 3.9 million households that reported an adjusted gross income of $200,000 or more in 2009, more than 10,000 households paid nothing in taxes, according to a new study from the Internal Revenue Service.
PEPE’S POTPOURRI: 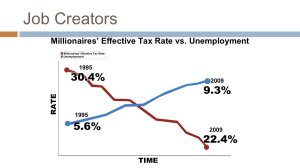 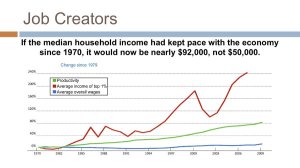 A recent study of sexuality revealed that adults with Body Modifications (tattoos, piercing) have had their first intercourse statistically earlier and were more sexually active compared with controls. There were no statically significant differences in sexual orientation, sexual preferences, engaging in risky sexual behaviors, frequency of masturbation, and history of sexual abuse between the groups. In contrast, the frequency of sexual intercourse was statistically higher and oral sex was more likely to be a dominant sexual activity in adults with BM compared with controls. The multivariate logistic model revealed that adults with BM were four times less likely to participate in religious practices and twice more likely to have early sexual initiation.

(Source: “Tattoos, Piercing, and Sexual Behaviors in Young Adults” from The Journal of Sexual Medicine.)

What this tells us is that the tattooed guy in the picture below probably had sex before he was old enough to walk and hasn’t been to church since. On the other hand, the woman in the other picture who apparently has neither tattoos nor piercings is actually a Buddhist nun and a virgin.

A. How Investing Turns Nice People Into Psychopaths, by Lynn Stout

“The problem with the homo economicus theory is that the purely rational, purely selfish person is a functional psychopath. If Economic Man cares nothing for ethics or others’ welfare, he will lie, cheat, steal, even murder, whenever it serves his material interests. Not surprisingly, although homo economicus is alive and well in many economics departments, many experts today prefer to embrace behavioral economics, which relies on data from experiments to see how real people really behave. Behavioral economics confirms something both important and reassuring. Most of us are not conscienceless psychopaths.”

“A ‘slut’ is just a sexually confident woman who sleeps with everyone but you.” 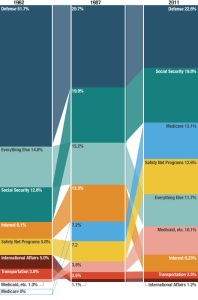 The interesting thing about this chart is that it shows that almost the entire relative growth of the various sectors in the federal budget over the years is caused by the rise in Medicare and Medicaid costs. I am not sure what that means, although it probably the explosive rise in health care costs in general and Bush’s unfunded mandate for section D coverage had a lot to do with it. On this issue the political debate is between the Republican insistence on reducing benefits and the Democrat preference for controlling escalating medical costs.The Republicans have the political advantage on this issue because Doctors and drug companies make political contributions and the typical user of Medicare and Medicaid does not. 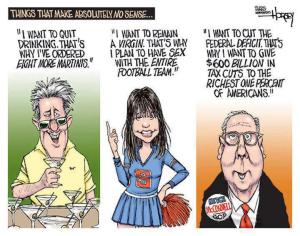 Some photographs from Gary of his friends in Pattaya (The Outskirts of Hell). 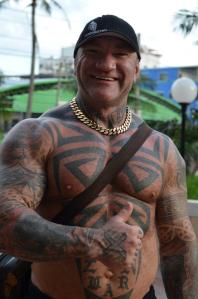 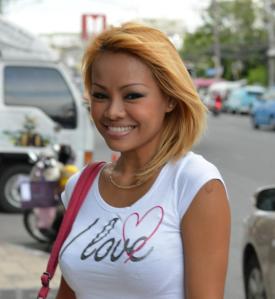