A. POOKIE’S ADVENTURES IN CALIFORNIA:

Halloween came and went with Hayden dressed as “the Scream” and me handing out candy to whatever goblins and ghosts might ring the door bell. 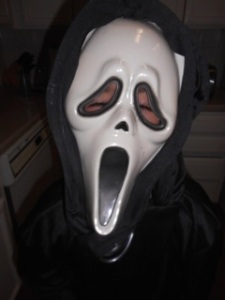 I was quite anxious, fearing that no one would come begging at the door. I could not face the humiliation of failing at the simple task of providing children something to rot their teeth and endanger their health. I kept jumping up and down from sofa and running to the door to see if anyone was coming.

Finally a shy tiny little blond girl dressed all in bandages showed up. Overcome with excitement and with a big nervous and undoubtedly scary smile on my face I held out to her the bowl of candy. She hesitatingly reached into the bowl and timidly plucked out one piece and dropped it into the bag she was carrying.

Interpreting her hesitation as  rejection of my sincere efforts to corrupt the innocent, I shouted “no,” stepped suddenly toward her and in one quick move dumped the entire contents of the bowl into her still open candy bag.

With a surprised squeak and eyes so wide I feared they would fall out of her head and follow the candy into the now almost full bag, she turned and ran off into the darkness.

I spent the remainder of the evening wondering if I were going to receive a visit from the police and questioning whether Halloween candy maven was a suitable career choice for me.

In the days following the trauma of Halloween, I returned to my role as nanny and in my spare time threw myself into my newest career as URB.im’s Bangkok Bureau Chief. That impressive title requires me to write four posts a month about those who believe they are saving the world by interfering in the lives of the poor and destitute of Thailand.

My pay would be barely adequate to keep a homeless Bangkok street beggar in two bowls of rice and broth a day. It was suggested that, as soon as possible, I find someone who otherwise is unemployed to take over the job, preferably a young local woman living at home with her parents since that was the usual situation of the other Bureau Chiefs. My new employers seemed dubious about entrusting their important work to some overweight broken down old attorney ex-pat who in his dotage would likely slip into some hole in the sidewalk and disappear into the city’s sewer system leaving them without their man or woman in Bangkok.

My first assignment is to write about organizations providing parks for squatters living in tar paper shacks perched on stilts over the same sewers it was expected that I would fall into.

On Saturday I drove to Cameron Park for H’s first Taekwondo Tournament. I believe it is one of the functions of the elderly to assume periodically the role of chauffeur of children and relieve parents of that obligation. God knows it is not that we (the elderly), have so much else of interest to do that we cannot spare the time.

I was somewhat anxious on the drive. This was my first time driving my charge to a tournament. I worried I would get lost and he would be disqualified (I did but he did not).

Taekwondo is one of the those Asian so called martial arts that makes one less competent in a street fight then if you knew nothing about it. At least if one were ignorant, he would not believe throwing long distance bombs would help him against a stronger opponent but instead would grapple with him in hope that he could pin down his arms before having his lights punched out. The martial art seems to be a cross between an athletic sport and dance; the quick controlled explosiveness of most athletic endeavors coupled with the grace and formalism of dance.

H. whose athleticism and technique leaves a lot to be desired, surprised me with his aggressiveness, chasing one of his opponents all over the gym to win 5-0. After the bout the other boy dropped to ground and started to cry. H went over to him and told him he should not feel sad because he, Hayden, had a secret. He explained that his Pookie told him that as soon as the referee signaled the bout to begin he should rush his opponent and hit him as hard as he can. “Now,” that you know the secret,” Hayden continued, “I am sure you’ll win your next bout.”

Flushed with excitement and with H clutching his medal we drove back down the hill, ate a pizza lunch and went to the movies to watch Wreck-it Ralph attempt to redeem his life in 3D animation.

Some time ago in this section of “This and that…”, I wrote about a childhood friend of mine who I discovered had died not too long before. I never finished the story, having been distracted by one or another of my reoccurring ADD attacks. As most of you know, I eventually republish these emails in my blog of the same name “This and that…” Recently, I received a comment from the son of that deceased friend. Here is a copy of his comment and my response:

Mr. Petrillo – My name is Donald Lundy Jr. and from time to time as I get bored at work I Google my name or my dad’s name and I happened to come across your blog and the Mopey Joe’s memories (December 15, 2011) discussing Tuckahoe, the Old Gang and my dad. What really brought back memories was the mention of my dad enjoying the Italian cuisine. I remember him saying how you guys would trade lunches as the Italian kids were tired of eating the Italian meal of the day and the black kids tired with whatever they were given to eat.

Dad passed away in 2005 but would be honored that the recollection of him would prompt you to begin your post of Tuckahoe and your old gang. He has always had a special place for the town as any kid would growing up there. With that in mind since 2006 I have worked on providing a small scholarship at Tuckahoe High School in his name that provides $1,000 per year to a Scholar/Athlete each year. This past June we had our 7th recipient.

Anyway I wanted to say hello and say I enjoyed your story and I hope you continue the story of Tuckahoe & my dad.

I am so happy to receive your comment. Your dad was a special friend to me while growing up. I left Tuckahoe to live in Yonkers before the 10th grade, so I did not experience his athletic prowess in high school. To me he was always just “Dondi,” a kid I hung out with and liked a lot. Thank you for reminding me that I forgot to complete my reminisces about him. I will return to them as soon as I can.

I do not know if I mentioned it in my reminisces, but we kids in Tuckahoe could not afford a boy scout troop so we made one up of our own. We put together enough money to buy most of a single uniform that we distributed among us. Once a year we would troop over the hill to Bronxville, at that time a white community in which we were not allowed to live and were discouraged from visiting, to have our own Boy Scout Jamboree. We would set up camp on the lawn of the Bronxville City Hall until the local cops kicked us off. Our troop flag, hung on a broken tree branch, rose proudly above our encampment. On our march over the hill, Dondi, in front, always carried that flag.

I do not know when or if I will get back to Tuckahoe again, but if I do, I would be honored to meet you.

In my next issue of “This and that…”, I will repeat my prior posts about Don Lundy and hopefully follow it up with  continuation of where I left off.

Over 600,000 Americans were killed in during the American Civil War a full 2% of the population at the time. The war was begun by the Southern states of the Union to protect the right of 1% of the population of those states to keep fellow human beings in slavery. The South insisted that liberty required that states rights trump human rights and that whether a person should or should not live life as a slave be dictated by the market.

Compare this with WWII fought 90 years later where 416,000 (less than .1% of the population) Americans died. WWII was fought by the allies against perhaps the most evil government on the planet since establishment of the Confederate States of America.

Even though women are 51% of the U.S. population, they hold only 16.8% of seats in the House of Representatives and 17% of seats in the Senate. And this year, the Fortune 500 had more female CEOs than ever before! Eighteen. Out of 500.
PEPE’S POTPOURRI:

B. Readings from the Bible: The Good Host.

“Look, I have two daughters, virgins both of them. Let me bring them out to you and you could do what you like with them. But do nothing to these men because they have come under the shelter of my roof.”
11. Genesis 19:8

“By nature all men are equal in liberty, but not in other endowments.”
Thomas Aquinas

“I used to be Snow White. And then I drifted.”
Mae West

“A willingness to kill members of ones own species is apparently correlated with high intelligence. It may be that chimps and people are the only species able to figure out that the extra effort to exterminate and opponent will bring about a more permanent solution than letting him live to fight another day.”
Before the Dawn by Nicholas Wade