“So long as there shall exist, by reason of law and custom, a social condemnation, which, in the face of civilization, artificially creates hells on earth, and complicates a destiny that is divine with human fatality; so long as the three problems of the age—the degradation of man by poverty, the ruin of women by starvation, and the dwarfing of childhood by physical and spiritual night—are not solved; so long as, in certain regions, social asphyxia shall be possible; in other words, and from a yet more extended point of view, so long as ignorance and misery remain on earth, books like this cannot be useless.”
Victor Hugo describing what his novel “Les Meserables” is all about.

I guess for California this can be called “The Year Without Winter.” Here it is in early part of February in the Northern Central Valley and it is too warm for me to sit out in the afternoon on the deck behind the house. While they freeze and trudge through the snow on the East Coast, I am looking for a place to go swimming. It has also been the longest number of days without rain for the area since the latter part of the 19th Century. Sometimes I go to the park that overlooks the great Folsom Reservoir. It looks more like a desert surrounding a mud flat than a lake.
************************************
When I go to bed at night, I usually surround myself along with my stuffed animals Oscar the seal, Gorilla No-name and Douglas the Monkey along with my computer, books and magazines so that when I wake up in the middle of the night I can read myself back to sleep.

On the other hand, “Canem Praeteri, Cave Modo Hominem.” (Never mind the dog, just watch out for the human) may be just as appropriate.
*********************************
I go to physical therapy two times a week for my leg. I have grown to enjoy it, the physical therapy not the pain in my leg. It is a bit like a senior citizens health club. It pleases me also because almost everyone, except for the therapists who are both younger and very much slimmer, are even fatter than I am. Say what you want about we Americans but one thing is true, we definitely are an obese lot.
************************************
On day while driving I listened to the Sacramento classical music station; you know music by mostly white boy bands from the Beetles to Clash. It really was not my teenage music, that was more from Frankie Lyman to well, the day the music died. I guess Classic Rock was more my stoner years. Anyway, I was listening to Joplin sing “Bobby McGee.” After the song the announcer mentioned that Kris Kristofferson and Janis Joplin were lovers until she died. I did not know that or if I did I had forgotten. That raised my estimation of both of them greatly.

Some critics criticized Joplin’s style and voice. I never understood that. Singing to me is the art of individual voices and probably almost infinite in variety. Like most notable singers, Joplin appeared to have a unique voice that distinguished her from other singers. Some time ago I assembled on tape over 50 performances of women’s voices from Joan Sutherland to Carmen Miranda. I loved that collection and would play it constantly. Denise called it my “Tragic Hearts Tape” because of the common theme of unrequited or lost love, but some definitely were not sad. Callas’ “Cara Nome” and even Joplin’s Bobby McGee were more upbeat than sad. Anyway D borrowed the tape and lost it. 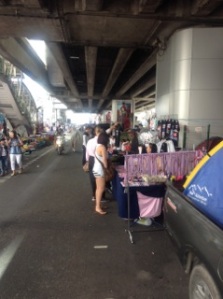 The above photograph was sent to me from Thailand by Nikki. It shows Sukhumvit Road one of BKK’s major arteries shut down by the long running anti-government protests. Unlike in other countries where streets shut down by protesters are often crowded with gangs of young men on the verge of riot, in Thailand the vacated streets are instantly filled by sidewalk vendors.

I have begun to settle in to my new surroundings. More or less my day goes as follows: 8:30 walk Hayden to school; 9:00 to gym to swim, exercise and take a sauna; at noon lunch in an inexpensive restaurant close to my apartment; 1 PM nap; 2-3 read or work on computer; 3 PM pick up Hayden from school and help him with his home work; 4 PM read or computer time while Hayden plays with the children downstairs; 7 PM dinner; 8:30 prepare for bed.

On weekends I go to my apartment in Paradise by the Sea and on Wednesday and Thursday I include my massage in my daily activities.

The maid has moved into the spare bedroom. I assume that now that the maid is in place to supervise Hayden, SWAC will find some pretext to encourage me to leave and return full-time to Paradise by the Sea. The apartment has maid’s quarters located off the kitchen with its own separate entry into the hall. The room is windowless and feels more like a dungeon. There is a small toilet, actually more a hole in the floor of a closet. The maid will not be relegated to these quarters but will have one of the three bedrooms for her own.

The results of my medical tests have revealed that although the CT scan of my abdomen shows my kidneys looking like road kill, my kidney functions are normal. I need to have an operation to clear up the remainder of my plumbing in the near future in order to avoid possibly living the rest of my life in dialysis. I will probably have the procedure done in the US as early as April.

The street on which we live in BKK begins (or ends if you prefer) at a gate to a huge parcel of land in the center of the city. The gate announces that beyond is “The Tobacco Monopoly if Thailand”. I have no idea what it is about. The property is filled with a great number of ramshackle low-rise wooden buildings and a few run down parks. From this gate Soi 4 travels generally north past my apartment building and a few other mid to lower class condominium building and hotels. Family restaurants and push carts line the street along this section of the road until it passes Hayden’s school where in begins to become progressively more populated with massage parlors, bars and budget hotels until it disgorges into the traffic nightmare known as Sukhumvit. Across Sukhumvit, Soi 4 becomes Soi Nana and passes through Arab(and Indian) town before going on to wherever.

On Soi 4 just before it meets Sukhumvit sits Nana Plaza, the first neighborhood one arrives at when one passes the gates into Hell. There, surrounding a small crowded plaza, rises three and four-story connected buildings where one can whatever perversions and titillation one desires from ordinary Go-Go bars, to ladyboy lounges to short time units.

Like in the US where urban private schools tend to locate in transition zones (the rent is cheaper), so it is with Hayden’s school. This morning as I walked Hayden up to the gate of the school across the street along an extended cement platform in front of some shops, a beefy fortyish bald farang, naked to the waist, reeled obviously stoned. He had scars on his head and body but was surprisingly bereft of tattoos. Accompanying him was a naked lady-boy clearly showing the major points of her conflicting sexes (known as “pre-op”) and another professional woman. It appeared that they had spent the night there and as the lady-boy put on what seemed to be the man’s shirt to cover the most conflicting parts of her, the man himself staggered across the street and tried to enter on the school grounds.

Now like most private schools and important buildings in BKK, in the morning and evening, stationed by the gate are four or so regular BKK police  to direct traffic. The School also has its own set of uniformed security. One spiffy dressed cop (all BKK cops dress spiffy) held up one hand palm vertical to the ground in the universal sign of stop and with the other made a no-nonsense gesture that the farang should return to the other-side of the street.

Now it is important to understand that at no time did the Thai cop in any way indicate he would touch the farang nor did he evidence any demonstration of anger. That would cause him to appear less than human and lose face. Imagine what people from this culture must see when they view western entertainment that shows uncontrolled fury and violence as a manly virtue. John Wayne must appear to them to be like a circus clown (come to think of it…. American football with its glorification of anger and violence probably appears to be played by water buffalo rather than humans.)

Anyway, the bald farang took the hint, returned to the other-side of the street and after a short period of slack-jawed milling about the trio ambled off in the general direction of the gates of hell.

After it was all over, I asked Hayden what he thought.

He said, “The girl was naked and the policeman had a gun”.

Just in case you may think that Hayden is too young to know the meaning of the word naked, I few nights ago while we were preparing for bed, he took off all of his clothing and put a paper bag on his head like a hat, pranced in to the bathroom where I was brushing my teeth and announced, “Look at me. I’m the Naked Chef.”

A. Samuel Beckett Used to Drive André the Giant to School. All They Talked About Was Cricket

B. During the Middle Ages in Europe, the floor of most homes was dirt. Only the wealthy had something other than dirt. Hence the saying, “dirt poor.”

The wealthy had slate floors that would get slippery in the winter when wet, so they spread thresh (straw) on the floor to help keep their footing.

As the winter wore on they added more thresh until, when you opened the door, it would all start slipping outside. A piece of wood was placed in the entrance-way. Hence: a “thresh-hold.”

By the way, this common use of dirt and thresh flooring is also the reason why we in the West, unlike in the East, customarily remain wearing shoes when entering a house.

I don’t know what this is about:

Alliteration mumbles
Metaphor lies, and
Metonymy sounds like something you buy on the Mercantile Exchange.

“However, as we know from John A. Hobson, one of England’s best economists, imperialism is the direct and necessary outgrowth of such accumulation. Capitalists could no longer finance sufficient profit on domestic consumption alone, requiring large and bountiful export markets. Furthermore, domestic industry would no longer require capital at a rate commensurate with high profits, which would need to be invested somewhere.”
This is Ashok (Ashok Rao)

In about 1980 or so, when the prison population growth really took off, privatization of our prisons began and the War on Drugs commenced. What that demonstrates is that the private market really is more efficient than government and the War, if one considers incarceration a casualty, has caused more American casualties than all of our wars combined and was even less effective than the war in Iraq.