Posted on September 2, 2015 by trenzpruca

This is my last night in Thailand on this trip. No matter how much I look forward to my next stop, I still feel a bit sad to leave.

Today I went to the health club in the morning as usual, but instead of swimming I spent my time swapping stories with the Old Sailor/Deep Sea Diver. This time he told me about when he tried to enter the body bag business in Santo Domingo. He and a few of his buddies from the bar he frequented also tried to purchase a mobile crematorium to go with the body bags. They believed, since it was relatively quite expensive in The Dominican Republic to die and be buried, a full service mobile death service would be welcome. They were not able to get the business started for some reason. I guess you can say that it died.

Following this failure, he travelled to Australia where he bought a land-rover and decided to drive to the northern most point of the continent. There were no roads for the last six hundred miles back then, but he plodded ahead anyway. One night while he was camping he was attacked by giant cane frogs. After that he slept in his car.- – – Hey, I’m not making this stuff up. That was his story and I’m sure he’ll stick by it.
*************************************

This evening after dinner I went to the pharmacy and bought the various medicines I thought I would need for the rest of my trip. I decided to take my last walk through that cesspool of corruption and model of capitalist market driven society that is Soi Nana. For some reason as I walked along, Christmas carols kept popping into my head and I began humming “O holy Night.” The ladies of the holy night graciously stepped aside and smiled as the old man with the funny hat, a protruding belly, brightly colored shirt and carrying a cudgel as a walking stick strode by singing Christmas carols. 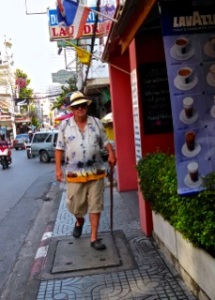 On my last day, on my way to the barbershop, I walked through the Arab-India-Africa section of BKK with its sandal shops and restaurants. It reminded me how much more attractive and clean it was than most other parts of the city. The restaurants are better also. 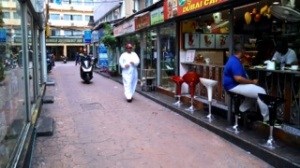 B. POOKIE’S ADVENTURES IN ROME:

Sometimes the lack of drama is welcome. The flight from Bkk to Rome was mostly uneventful, except for  the fact that I thought I was in for a long six-hour layover in Singapore. At least that airport provide travelers with a pool, sleeping cubicles and massage machines to tide them over. I was looking forward for a swim while whiling away my time between flights — at least before they told me at the check-in in BKK that I read my ticket wrong, I was going to Shanghai instead. So rather than enjoying the capitalist excess of Singapore airport, I experienced the socialist realism of Shanghai for six long hours.

Each time I return to Rome in is with a little sadness. There are a few cities I call home — New York because I grew up there, San Francisco because I’ve lived there longer than in any other place and of course Bangkok because I live there now for some of the year and have done so for five years. There is also Barcelona and Istanbul, cities I love but have never lived in. Then there is Rome where I lived for about three years and to which I have returned innumerable times. If it were not so expensive, I very well might be living here now.

My lodging during this trip is in something I found in Air BNB. It is located less than a block off of the Via Veneto in central Rome. It is hostel-like usually housing religious groups of very modest means making pilgrimages to the city. It feels a little like a cult operation although the woman who runs it is very nice. It is quire basic. My bed is only a slight upgrade from a cot.

On my first day here I took my brother-in-law George on a tour of some of the well known tourist spots and to some places very few tourists visit. In the evening we along with my sister Maryann had dinner near Piazza Navona. Here are some photographs of the first day.

George by the Colosseum

The next morning at breakfast, Gregorian Chant filled the air from somewhere in the building. I sat there listening and thought of the liturgical reform that I was so eager to promote in 1960 and so equivalent about the results a few years later. I feel like a monk, living in a plain cell, sleeping on a cot, listening to Gregorian Chant and worrying about liturgical reforms. Perhaps I should consider that option for the next phase of my life.

After breakfast I joined my Maryanne and George for the days stroll around the eternal city.

Maryann and George at Cafe Greco

We began with coffee at Cafe Greco, then off to the Keats-Shelly museum located in the rooms overlooking the Spanish steps where John Keats died of tuberculosis. I do not consider my trip to Rome complete without visiting here.

Then up the Spanish Steps and past my old law office into the Borghese Gardens to visit the Borghese Museum, one of the worlds great museums with their collection of paintings Caravaggio (a thug and murderer but a great artist) and the Bernini sculptures (mostly statues commissioned by various princes of the Church depicting rapes and attempted rapes by sundry gods) and Canova (who was incapable of rape). The museum was sold out so we walked to the church displaying Bernini’s The Ecstasy of Saint Teresa (psychosomatic rape). It was closed, so we decided to eat lunch. We found a great local restaurant a few blocks away from the tourist areas. After lunch we visited the ruins Baths of Diocletian where, as his last commission, Michelangelo designed a spectacular church. Located in this church is one of the wonders of the age, the Great Sundial. It was used to calculate the accuracy of the Gregorian Calendar prior to its introduction into use.

Then, off to visit Borromini’s great architectural triumph, the church of San Carlo, after which, to Berninini’s Saint Andrea followed by the Doria Pamphili palazzo with its huge collection of paintings. Finally we visited the Church of St Ignatius, the mother church of the Jesuits with its magnificent trompe l’oeil frescos. We finished off the day with drinks, overlooking the city at night from the rooftop terrace of the Intercontinental Hotel.

The next morning I discovered a few other guests had checked into the place I was staying at. They were middle-aged men with grey hair and chalky white faces. I guessed they must be priests, because only those who take permanent vows of chastity and spend their lives in darkened churches could have skin so pallid.

C. VOYAGE TO ROCCANTICA IN SABINA

Roccantica is a small town in Sabina about an hours drive from Rome. It is the original home of my paternal grandmother. My grandmother had 12 brothers and sisters. Some emigrated to the US others to Australia and South America and some stayed in or near Roccantica. The town is noted for, in the tenth century, sheltering Pope Nicholas II, who, having been chased from Rome by the Holy Roman Emperor Otto, took refuge in a tiny tower in the town where he was defended by the men of the town, all thirteen of them, during a two-year siege until it was lifted by Robert Guiscard’s arrival with his troops. For this act of singular heroism the Pope awarded the people perpetual exemption from taxes. The citizens of the town enjoyed this benefit for 900 years, until in was revoked after the unification of Italy during the Risorgimento.

One of the country’s more prominent medieval reenactments is held once a year in the town.

The town is also noted for a remarkable work of folk art efforts by the local priest for the glory of God. In addition to his fame as a folk artist this priest, who because of his short stature was referred to as the dwarf priest, was in love with my grandmother and reputed to have had an affair with her. He dedicated his life’s work to her. I am convinced that he also was insane. 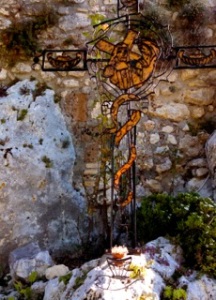 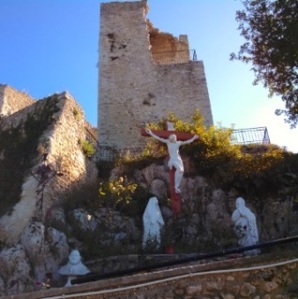 Examples of the priestly folk art that dominates the town heights around the restored church.

It addition to that bit of notoriety, one branch of the family became wealthier than the other citizens of the town when one of them, a priest, became the private secretary to Pope Pius XII. Due to that bit of good fortune, that branch of the family inherited two of the town’s churches. The dwarf priest administered the local parish church and the state I believe owns the one he restored and adorned with his brand of folk art. Because of the peculiarities of Italian tax law the family keeps their two churches closed and locked so that the tax men will not learn of the artistic treasures within. As a result they remain living in genteel poverty despite their potential wealth.

Maryann and George in front of the house in which my grandmother was born. 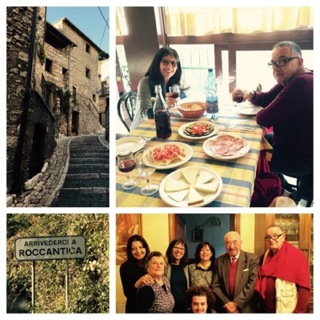 A group of photographs including lunch in one of my favorite restaurants in all of Italy located in the town and a snapshot of Mary and I with some of the remaining relatives assembled in the house where my grandmother and all dozen siblings were born. 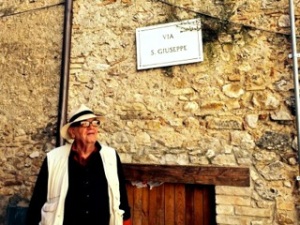 Via San Giuseppe, the street on which I used to live

The street by the apartment I lived in for about a year.

The view from that apartment. 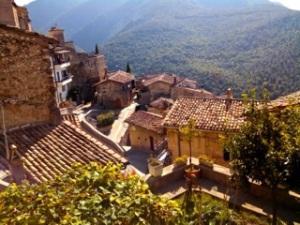 On the way back to Rome we stopped at the nearest town to Roccantica, Casperia. My son Jason grew up here.

The walls of Casperia

The municipal plaza in Casperia where Jason and I used to stay at times.

“A responsible government is one in which the real disposition of power in the structure is the same as it is in people’s minds or as it is in law (which is an objectification of how it is subjectively in people’s minds). In such a case, when people act on the basis of the picture they have of the situation, they will be acting on the basis of the real distribution of power because the two are about the same. Thus, there can be no sudden rude awakening from the fact that the situation is, in fact, different from what it is reputed to be.”
Carroll Quigley, Weapons Systems and Political Stability.

Note: those interested in back issues of This and that…. they can be found at: josephpetrillo.wordpress.com