I flew Ryan Air from Rome to Palermo. It reminded me of flying Icelandic Airlines in the 1960s. Among other things the seats did not recline. One woman sitting across the aisle from me boarded with a toy Maltese dog sporting a “service dog” emblazoned jacket. What sort of services a dog of that size could provide I refuse to speculate on. Although the woman had carefully complied with all procedures and was approved by the departure desk, the pilot insisted he was not authorized to fly with dogs. After many, many tense minutes the crisis was somehow resolved and we took off, dog and all.

I met my sister and George at the airport in Palermo and we immediately left for Erice.

Before arriving at Erice we stopped to view the impressive classical ruins at Segesta.

Pookie in front of the temple at Segesta

Located on the top of a massif about 3000 feet above the plain and sea below Erice can be seen from most of western Sicily. At times because of its height it disappears into the clouds. I loved the place as soon as I saw it.

Upon our arrival, we checked into an old Carmelite nunnery converted into a hotel. Similar to my lodgings in Rome, the hotel maintained an aura of religiosity. It retained all of the religious trappings of its prior life, including a chapel for devotional use by guests.

Checking into the “Carmine.”

We set off to explore the city and to have dinner. We were enthralled by the views from the city walls and the quiet peacefulness of the town. Now and then a bell would ring out marking the liturgical hours. The City, as small as it is, has 60 churches, most of which state appropriated during the Risorgimento and now house museums, artistic or scientific institutes or simply stand empty.

Later, of course, a fine dinner at a place suggested by the hotel.

Maryanne and George at dinner

The following morning we continued our tour. One side of the city still has its ancient Phoenician walls. 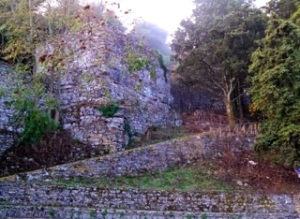 The city, like Sicily itself, is triangular-shaped. At one point is the Cathedral and main gate. At another stands the Saracen-Norman castles. 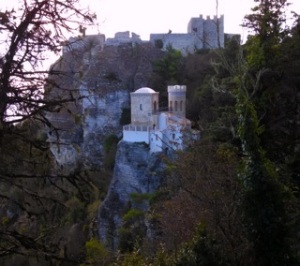 At the third point are the old Spanish and Jewish Quarters where our hotel was located. 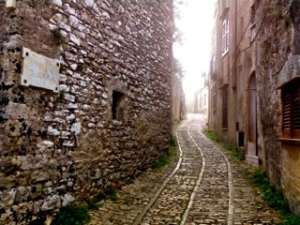 A street in the old Jewish quarter.

The city is high enough that I watched some clouds float across the plains and creep into Erice like tourists looking for espresso. 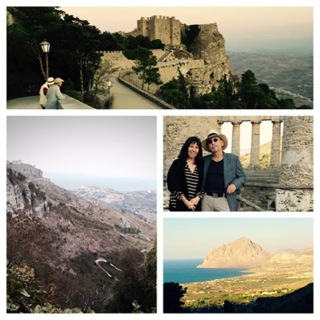 A final view from the heights of Erice

Following an extended and mostly uninteresting drive from Erice we arrived at Agrigento, the Montelusa of the Montalbano novels by Camilleri. Agrigento an ancient Greek City boasts some of the finest examples of Greek classical temple Architecture.

Maryanne at the Valley of the Temples

It was also the home of the playwright Luigi Pirandello. Camilleri’s first published book was a biography of Pirandello. The playwright, in a novel of his own written over 100 years ago, first named Agrigento Montelusa.

George in front of the Pirandello homestead

We began at the Questura where Montalbano unhappily spent much time explaining his actions to his superiors. It stands across the street from its rival police force, the much reviled Carabinieri. 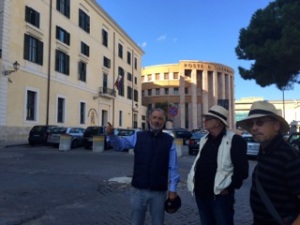 We visited the site of the school at which Camilleri was studying for his final exams when the Allies bombed it during WWII killing over 300 people. The event played and important role in the Terra-cotta Dog novel.

The Churchyard where the school was located.

Camilleri’s middle name was Calogero. Saint Calogero, a much beloved saint in Sicily, is the patron saint of Agrigento. Calogero was black and arrived in Sicily from Africa sometime in the forth century. Calogero is a common name and surname in Sicily.

The Church of Saint Calogero where Camilleri was baptized.

In one of the novels, I think it was The Snack Thief, Cantarella is sent off to collect some information from an accountant in the Arab Quarter of the city.

The Arab Quarter – the accountant’s office is off to the right.

We visited a several other locations and then set off for Porto Empedocle, the fictional Vigata.

In almost every novel, at some point Montalbano will eat lunch at his favorite restaurant and later walk out on the jetty, sit on the flat rock beneath the lighthouse and consider whatever case he is working on or more than likely his life in general.

The lighthouse and flat rock at the end of the Jetty

We drove past Marinella where Montalbano lived next to the beach in a much more modest house than the one pictured in the TV show. Unfortunately, because of construction of a project promoted by the very ambitious current mayor of Marinella, we were unable to get on to the beach itself.

We then went to the Turkish Steps an unusual marl formation that appears in The Voice of the Violin, I believe.

The Turkish Steps and our guide Michelle

After visiting too many scenes from the novels to recount, we stopped at the restaurant owned by Enzo that Montalbano, after his beloved lunch place near his office was closed, with great trepidation tries and falls in love with. Enzo was not there but his brother-in-law was and we visited with him for a while. 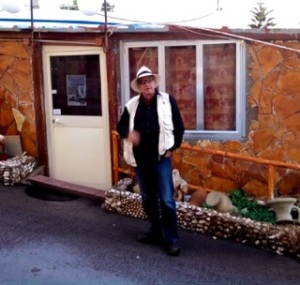 Pookie in front of Enzo’s restaurant.

Finally, we set off to our lodgings to rest before facing the city of Canicatti and our relatives.

I sincerely apologize for sending these pallid travelogues to those devoted readers of T&T who look forward to my scintillating prose, trenchant observations and insightful clichés.

“… some alternative method of organizing large numbers of men had to be devised so that the energies of such men could be coordinated and directed and so that they could be deprived of much of what they produced in order to accumulate capital to be used for the creation of non-subsistence enterprises (from art and literature to war and monuments).”
Carroll Quigley.