Well, for the last three years almost unbroken sunshine has fallen on The Golden Hills with bringing with it a terrible drought. For the past three weeks there has been very little sunshine at all. The rain dribbles from the grey skies and flowing along the gutters sweeping the streets clean of leaves.

I am back on antibiotics and feeling better but implacable advancing age grapples with my spirit and is now winning two out of three falls.

A mud soaked holiday season approaches, its color certainly will not be white except high in the mountains.

The leafless trees scratch the grey skies, winter is here. Some may see it as an ending but I prefer to look at it as merely a preparation for spring — another rebirth, a promise. It is only we, in the winter of our lives, who know there are no more promises, no more springs. Nevertheless, we endure — for a while.

There is a nine-year old in town who has won the national cross-country championships. Hayden has raced against him in local races. It is fun to watch the young champion run, finishing the 2.5 mile course often 300 yards ahead of the second place runner, sometimes even passing the high-school runners pacing the race.

At one race Hayden went up to him at the starting line and said to him “You will probably win an athletic scholarship to a good school. I am happy for you.”

By the way December 20th in the Gregorian Calendar is a free day in Pookies calendar. The day you can do whatever you want. So, enjoy — but try to avoid hurting yourself or others.

We ought to give that day a catchy name. Any suggestions?

Maurice Trad has died. Maurice’s friendship saved me at a time I thought I could not be saved. He was always a better friend to me than I ever was to him.

It is always a sign of the deterioration of my mental health whenever I bury myself in obsessive reading to the exclusion of almost everything else. Usually it means I am teetering on the edge of depression too deep even for my happy pills to remedy. At Ruth’s suggestion, I am ripping through the Martin Beck mystery series. Interspersed with these I have begun reading Sara King’s Legend of Zero series. It is not her books that fascinate me. They are post contact warrior stories where humans and other alien species find themselves in foxholes together fighting an intergalactic war. Sort of like Starship Trooper except the insects are on our side and fighting among themselves because the entire universe is controlled by a galactic state that finds itself every few years putting down a rebellion by one or another of the bazillion species that make up the state. The rebels are usually the most horrible species one can imagine but not nearly as horrible as members of the state’s ruling caste. Everyone talks like post adolescent soldier grunts from WWII. For those that like this stuff it is pretty good and better than most.

However, what really interest me is the author. She lives somewhere in the wilds of Alaska. Her publicity picture shows a middle-aged child of the counter-culture from the 70’s — floppy hat, loose cotton clothing — standing before what looks like an organic garden. She says that she intends to “change the world” with her character writing. I do not know what that is or whether it is a good thing, but maybe she, like Zero the main character in her books, may well do so. She says:

“My name is Sara King and I’m going to change the world.
My goal is simple. I want to champion, define, and spread character writing throughout the galaxy. (Okay, maybe we can just start with Planet Earth.)”
King, Sara . Zero Recall (The Legend of ZERO, Book 2). Parasite Publications.

Pookie says check it out….

The Little Car that Could

Jason and I stood on the ferry’s deck as it approached the Port of Palermo, the three thousand-year old harbor originally built by the Phoenicians. The morning sun was shining brightly —the water a deep blue-green and the low-lying city a dusty brown with red arabic cupolas here and there and the cathedral a mix or gothic and moorish architecture rising up in the center.

At that time, 1968, the city had not yet sprawled beyond its medieval walls. Along the shore those walls still bore the scars WWII bullets. Mount Pellegrino loomed over the city like a frozen storm.

Palermo Harbor with Mt Pellegrino in the background

As the ferry docked Jason and I ran down into the hold, squeezed into the Trojan 200 and waited for the doors to open. They opened slowly. Light penetrated the gloom. The noise was almost painful as the engines in the vehicles revved up together, and then we moved down the ramp and into the city.

We drove into and through the city looking for the road that would take us across the Island to its southern shore and Canicatti our destination.

While driving through the city we passed San Cataldo, The Cathedral and the Opera Houses and then we out beyond the walls heading toward the center of the Island.

At that time there were no highways in Sicily, mostly two lane roads often rural and at times unpaved crossed the Island. Each road connected a town with the nearest one to it, pass through the center of the town and meander on to the next village.

After leaving Palermo, the first village we came to was perched on top of a mountain. The road swooped in long switchbacks until it entered the village. We started up the hill but soon the 9 hp engine could go no further. So I got out of the car and pushed it up the mountain to the edge of the town. It was getting very hot and I began to sweat a lot. I got back into the car and drove it through the village. As we wound our way through the narrow streets,The people came out to watch us pass by. Unlike towns in other parts of Italy where the people would shout, smile and gesture, the villagers here lined the road in silence — the women mostly dressed in black and the men with their caps slouched low over their foreheads. Only a child now and then would smile. When we came to the end of the settlement, I saw that the road swooped down from the mountain top, crossed a small valley and then careened up another mountain upon which sat the next village. And so it went. I would leave a village, drive the car as fast as it would go on the down slope so that I could get as high a possible up the next slope, then get out of the car and push. 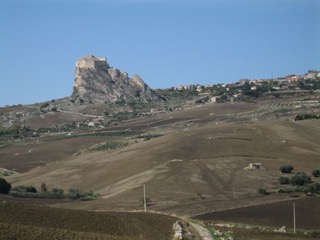 The Road up to Mussomeli

(The above photograph was taken in 1970. It shows the single narrow road up to the village. It also shows the land as treeless, barren and rocky. It no longer is that today. After 2000 years trees are again returning to Sicily.)

Finally about eight hours later, I had travelled a total of 80 miles, my clothing drenched with sweat and every muscle aching. I decided I could go no further than the next village but as we emerged, I saw below not another mountain top village at the end of the road but a rather large town in the valley, Canicatti.

It was late in the afternoon when we arrived in the town. It was larger than I thought. That was a problem. I knew the last name of my relatives, Corsello, and the town in which they lived, Canicatti but that was all, no address and no first names. I had thought Canicatti would be a small village where everyone knew everyone else, but it was a rather large town instead. I drove into the town past a small park where I learned later my mother used to play as a child and stopped by a coffee-house with chairs and tables sprawled haphazardly about. The wall by the café was pock-marked with bullet holes. I was later to find out that is was the site of the Canicatti massacre where American soldiers slaughtered a number of townspeople for no reason.

So, I started asking if anyone knew where a family named Corsello lived. Someone mentioned some people by that name lived just around the corner. We drove there. It was a new building one of the few in the town at that time. I found the name on a card and pressed the button. “Qui e” someone responded. After a somewhat difficult conversation since I did not speak Italian and they did not speak English we managed to discover that they were in fact the right family and they came down from their apartment to greet us. They invited us in. But before entering Vincenzo the patriarch asked, “What are we going to do about the car. We cannot leave it here where it will be stolen.” (to be continued)
DAILY FACTOID:

2012: In Thailand a worker killed another worker with a machete after being taunted for having a small penis.

(I think is was Darwin who pointed out that a man’s chances of surviving to breed are greatly diminished by disparaging the size of someone junk when that other person is carrying a machete.)

What “Occupy” is all about and what it really wants:

This may be one of the most disheartening charts I have posted so far. What this means is that many of those graduating from college today are so deeply in debt that the normal process of exploring options and settling into a career are denied to them.

It also encourages students, rather than educate themselves to be able to handle social and economic changes, to prepare themselves for only jobs available upon graduation despite recent experience demonstrating that those jobs may disappear long before their working lives end. We are no longer educating students but merely engaging in vocational training.

“The state is a good state if it is sovereign and if it is responsible. It is more or less incidental whether a state is, for example, democratic. If democracy reflects the structure of power in the society, then the state should be democratic. But if the pattern of power in a society is not democratic, then you cannot have a democratic state. This is what happens in Latin America, Africa and places like that, when you have an election and the army doesn’t like the man who is elected, so they move in and throw him out. The outcome of the election does not reflect the power situation, in which the dominant thing is organized force. When I say governments have to be responsible, I’m saying the same thing as when I said they have to be legitimate: they have to reflect the power structure of the society. Politics is the area for establishing responsibility by legitimizing power, that is, somehow demonstrating the power structure to people, and it may take a revolution, such as the French Revolution, or it may take a war, like the American Civil War. In the American Civil War, for example, the structure of power in the United States was such — perhaps unfortunately, I don’t know — that the South could not leave unless the North was willing. It was that simple. But it took a war to prove it. “
Carroll Quigley, Weapons Systems and Political Stability.

Happy Christmas to all and to all a Good-Night.