Posted on November 3, 2015 by trenzpruca

“…people who make the most productive contributions, the ones who make lasers or transistors, or the inventor of the computer, DNA researchers — none of these are the top wealthiest people in the country. So if you look at the people who contributed the most, and the people who are there at the top, they’re not the same.”
Joseph Stiglitz

Yesterday, January 2 (13 Joseph 2004) I was finally able to get back to editing Quigley’s “Weapons Systems and Political Stability.” I am about at page 700 on my first edit and have about another 700 pages more to go. The first edit is intended only to familiarize myself with the material and catch the most egregious errors (there are a lot). My next edit will be to polish it up, add some headings for clarity and write a new introduction.

Because Quigley died before finishing his book, it ends at about 1500 AD. The previous edition includes Quigley’s article on the French Revolution in an effort to fill in the gap. I think that is inadequate. I probably will cross reference his major published work, Tragedy and Hope: A History of the World in Our Time, or add an edited version of the post-1500 portion of that book.

I have begun editing the rise of Islam and the Arab conquests section of Weapons. It is interesting to note that the Arab political dominance of Islam lasted only 300 years or so, thereafter the Islāmic world was ruled mostly by non-Arab Muslims (Turks, Kurds [Saladin], Moors and the like) until at the end of WWI (1918) when the allies created the system of Arab-controlled states at the expense of those Islāmic tribes and nations that commanded the Near and Middle East for the previous 1000 years.

Also, the Arabs like the Hebrews were Semite language speakers from tribes that migrated out of grasslands south of the Fertile Crescent during dry periods. Thus, ironically, not only do they share the same language family, original culture and genetics but also the same religion in some respects. Islam can somewhat be looked at as a heretical form of ancient Judaism since the Koran acknowledges the Hebrew bible as among its founding documents and Gabriel himself supposedly directed the Prophet to begin his vocation as a prophet instead of going into his family business selling souvenirs to pilgrims visiting Mecca. (This abandoning of the family business continues a long tradition among religious leaders. After all, Buddha could not stand being a prince, Jesus was bored by carpentry, Paul saw no future in tax collection and Joseph Smith needed the money.)

Similarly, Christianity can be seen as a heretical form of Judaism. Christ, as a Jewish heretic, preached a different form of Judaism much as the Pharisees (another heretical group) did in creating a good deal of modern Judaism. Christ urged his followers to, “forget the forms and rules, how you behave and treat others is more important.” The rabbis (at least after Hillel) seemed to say, “the rules and prescriptions should not be taken too literally, but they are a good thing to contemplate and discuss in order to determine how to behave.”

On Sunday I drove to the Bay Area where I had a very pleasant lunch with Kathleen who now heads the AG’s antitrust division. Later I visited my mom who was quite spry and alert. She believed that the place where she had lived for the past 10 years or so was a hospital that she had just entered a few days ago because she had suddenly taken ill. Earlier in the day she felt better so she began to change into her street clothes so that she could leave the hospital and find a job.

Well, I’m back under doctor’s care. A recent unusual shortness of breath while exercising prompted my visit to my him. Following a series of tests including a CT-scan, we have eliminated a return of a pulmonary embolism and heart disease, confirmed my long-standing gall stone problem and discovered what they euphemistically call a “lung nodule.” More tests and procedures to follow.
____________________________________________

Today I said to myself the hell with the temperature or my physical maladies I’m going swimming. So I dove into the outdoor pool at my new health club and swam for twenty minutes which is pretty good since I have not seriously exercised for over two months. After my swim I spent some time in the hot tub, took a steam bath and showered. It made me very happy.

The Martian by Andrew Weir, soon to be a major motion picture starring Matt Damon (a man who will always look barely post-pubescent), is a man-boy novel without the killing and explosions. It is about science, engineering and manly pluck. I found it fascinating and enjoyable — being a man-boy myself. Dick McCarthy, however, pointed out that despite the intensive descriptions of electronic monitors, space suits, airlocks and the like, the Robinson Caruso of Mars almost never glances out the window and tells us what the planet actually looks like. It is sort of like writing about a rafting trip through the Grand Canyon and describing in great detail the raft’s paddles and their uses but never mentioning what you saw when, not otherwise engaged with problems and vagaries of riverine locomotion, you looked up at the variegated walls of that magnificent chasm.

Pookie says check it out…

2014 saw science bring humans closer to exercising the attributes of Gods. A research laboratory in the US created a synthetic chromosome raising the possibility that we may soon become able to create complex life forms. Another team of scientists has demonstrated brain to brain communications creating the potential of direct neural communications between humans. Also, a way to make matter directly from light has been postulated. Finally a new theory about how life forms out of inert matter has been proposed.

About 80 years ago the paleontologist Teilhard de Chardin (“Our duty, as men and women, is to proceed as if limits to our ability did not exist. We are collaborators in creation.”)
theorized that as humankind increasingly populated the globe it would through evolutionary processes, produce a new type of life that he called the Noosphere, the collective consciousness of humankind. This he claimed would become one with God. Alas, life being what it is, simply the search for a more efficient method of converting energy into matter by reversing entropy, I sincerely doubt this new life form, if it actually comes into being, will be much different from the mad, irresponsible homicidal gods postulated in humankind’s historical imagination.

1550: In about this year the illustrious German (Franconian) Imperial Knight, Gottfried von Berlichingen, or as he was known, “Gotz of the Iron Hand” because he went into battle with a prostheses to replace the hand he had lost in a previous war and whose major claim to fame was a preternatural ability to piss everyone off, issued his legendary challenge, ”er kann mich am Arsche lecken” (“he can lick my arse”). 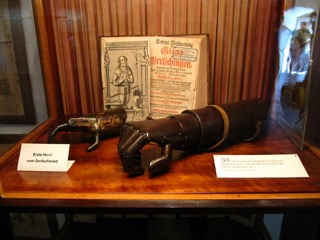 The Iron Hand of Gotz

Gotz, as can be expected, was beloved of the Nazis who memorialized him by naming several instruments of death in his honor.

(It has been rumored that Marvel’s Winter Soldier was the reincarnation of Gotz.)

“…we usually think of Christianity as the great contrast to the Roman ideology, but this is to misconceive the whole civilization. Christianity as an organization was in no way incompatible with Romanism as an organized structure. The teachings of Christ were, but these teachings were so very alien and strange that no one took them very seriously and being a Christian soon meant, not belief in Christ’s teachings but belief in Christ, a totally different thing. The same thing happened in Islam where Muhammad’s teachings were soon ignored, and the requirements of Islam became a few rituals, plus monotheism, and so far as Muhammad was concerned, belief that he was the Prophet of the One God.

The Christians cut down Christ’s teachings to a minimum also, insisted only on the belief that Christ was the Son of God and some related beliefs and certain rituals, and then began to engage in violent controversy on minute details of implications of these, very remote from Christ’s teachings or attitude. On this basis, there was not much in Christianity which could not be reconciled with the Roman system, and the original enmity between the two came more from the Roman side than from the Christian.

…The willingness of the Christians to become part of the Roman system can be seen in the present survival of the Roman Catholic Church as a copy of the Roman empire, a system organized in municipalities and provinces under an absolute ruler who uses the robes, nomenclature, language, and modes of action of the late Roman empire.”
Carroll Quigley, Weapons Systems and Political Stability.

Pookie enjoys himself at the Doria Pamphili Museum in Rome