Venice and the Biennale.

The next day I left Sacile by train for Venice and the Biennale. The sky was overcast but my spirits were high. I was excited because the Biennale was something I always wanted to visit, even though I was never sure what went on there. As I discovered, it includes the visual arts, music, a film festival and architecture exhibits. Menotti’s Festival of the Two Worlds was another I longed to see although I had no idea what two worlds he was thinking of (actually the US and Europe). I imagined I would walk down the streets of Spoleto with strains of Vivaldi alternating with snatches of Amahl and the Night Visitors cascading down upon me from open windows.

I always try to remember when I visit Wonders of Nature or the Glories of Humanity that they also usually are someones home and that pride of place is not all that it is cracked up to be.

By the time I arrived in Venice the sun was shining. There may be cities with more canals or more bridges than Venice, but there are none more picturesque. Every time I come here, I am overcome with an uncontrollable urge to snap pictures of the same buildings and scenes that I have taken perhaps a hundred times before. It is either Venetian magic, hypnosis or some dread disease that crawls out from the foetid canals at night.

I could imagine some old Doge sitting in an elegant room in his palace surrounded by his architects and engineers, looking up at the paintings by the Republic’s greatest artists and saying, “You know guys, someday everyone will be able to make a picture of this town just by pressing a button. At least, it will rid me of those arrogant overpriced artists cluttering up the piazza — they flit around like locusts, worse like lawyers. So remember, whatever you do make it picturesque so that should this town ever sink under the sea everyone can still recall the glory of the Serenissima.”

And so, I plunged into the mass of tourists, taking photographs along the way.

As usual, whenever I visit Venice, I try to lose myself in the tiny and dark passageways of the city. Yet no matter the mysterious lanes one explores, or even if you, like a character in a Thomas Mann novel, feel compelled to follow a flash of color of someone crossing a small bridge and disappearing into a maze of alleyways, you always end up at either the Rialto or Piazza San Marco.

In case you doubted that this is the Century of the Woman, I came across the following election posters in a plaza along the way.

Near the Academe Bridge, I stopped for a glass of cool white wine at a tiny cafe where, a few years ago Hayden, Nikki and I stopped for some wine and sandwiches. Sitting next to us at that time were two middle-aged teachers from England who shared a home together in Venice. We talked and drank more wine until I became tipsy and tripped over the sign in the alley outside as I left. 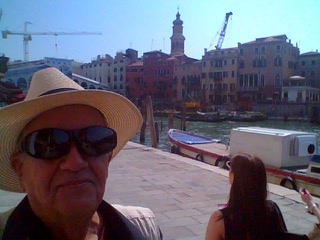 Pookie’s selfie on the Rialto

After pushing through the crowds of tourists thronging Piazza San Marco and taking the requisite photographs, I walked along the waterfront that Canaletto painted almost as many times as I had photographed it. 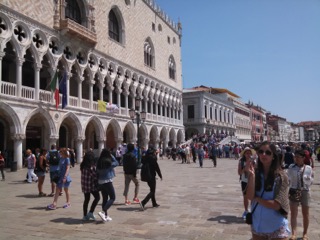 The light was typically Venetian, luminous and indistinct that made everything shine like it was lit from within and, unlike the sharp lines of the chiaroscuro light further south, turned the shadows gray and fuzzy. I stopped at the church of La Pieta to pay homage to the Red Priest (Vivaldi) and his teenage all-girl marching band that used to delight the Venetians with the Baroque version of a rock concert.

I always liked this much-photographed scene.

The Restaurant is on the right.

The Sarde con Saor was quite tasty although sardines are far down on my personal list of favorite foods. The dish is prepared by covering the sardines with onions cooked in olive oil until they are soft and drenching them at the table with wine vinegar and is accompanied by some polenta.

Following lunch I continued along the embankment toward the park (Giardini) at the far end of the City in which much of the Biennale’s visual arts were displayed.

In the many times I had visited Venice, I had never ventured beyond the Arsenale before. It is surprisingly comfortable neighborhood that is much less overrun with tourists than other parts of the city.

Many of the Biennale exhibits and performances are spread throughout the city in museums, churches and storefronts that, due to the Italian notorious genius for hiding their entrances or misstating their opening times, I unknowingly passed by, but I thankfully found a few. Here are some.

A sculptress who likes balancing big rocks on their narrow end.

An art commune that specializes in reusing refuse.

An artist who paints her buildings strange colors.

An exhibit of ancient musical instruments.

There was even one by an artist named Tsang Kin-Wah called, The Infinite Nothing (I think it was the Hong Kong exhibit). It contained a totally lightless room. As I stood before the door, I became very frightened especially because I could not see one inch into the room even though the hall in which I stood was well lit. Despite the urgings of the hostess, I refused to go further and left. I guess I will never become the reluctant hero of a science fiction novel or ghost story.

The main venues for the visual arts exhibits, however, were grouped in the Giardini and the Arsenale.

The entrance to the Giardini.

In the Giardini there were many pavilions, some permanent and some constructed just for the Biennale. Most pavilions featured a single artist or a small group of artists and most were installations. I dislike installations. They always remind me of industrial junk yards but not half as interesting. 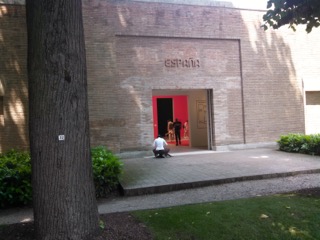 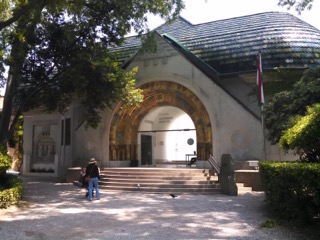 The US pavilion contained a pretty good installation by an artist who did things much like my brother in his installations 30 years ago. What it had to do with All the World’s Futures, the theme of the Biennale, I had no idea. 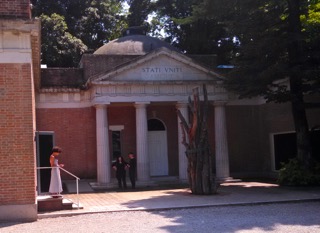 By far most of the art displayed was self-important and bombastic but, now and then, one came upon a piece that gently rolled down your socks and kissed your feet. 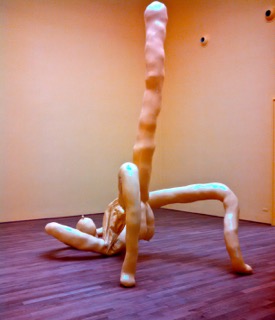 An apotheosis of self-importance and bombast, from Britain

This Japanese installation tickled my toes

Speaking of apotheosis, there actually was a pavilion entitled Apotheosis. It was either Czech or Polish or something. I never found out.

Upon entering you found yourself in a large white room with a big blank white canvas-like feature at one end, perhaps 20 feet high and 15 wide. Most people would stand there, attempt to puzzle out what they saw, give up and leave. But, if you approached the slab you would find an elaborate painting the same size behind it. Unfortunately, the slab and the painting were so close together that you had to squeeze in between them to see the painting and then you could only see it by looking into a mirror pasted on the back of the white slab. The painting itself was a reproduction of a somewhat well-known allegorical painting of about 50 years ago entitled, “Apotheosis of the Slav rising from Slavery.” (I’m not kidding.) The current artist who prepared the installation had added to the painting things like a chain around the neck of the main figure, a tattoo on his arm that said, “Revolver” and a lot of other graffiti. “Obviously,” I thought, “there’s a whole lot of symbolism here longing to be free.” Alas, I was far too exhausted at this point to try to figure it out, so I moved on.

Completing my tour of the pavilions and exhibits in the Giardino, I retraced my steps to the Arsenale.

There the exhibits dealt mostly with the arts of war and were pretty gruesome so I passed through them quickly and on to the few others not dedicated to the subject.

A Russian artist built this.

At first, I thought this was a covering for some remedial work on the walls of the Arsenale, but I was assured by a placard that this was a work of art. There are times I wish that Marcel Duchamp had been strangled in his cradle.

After this, I thought it was time to head back to the station. I decided to first explore the area to the northwest of the Arsenale that had been the haunt of Dibdin’s Aurelio Zen before he was exiled to Sicily for solving a crime no one wanted him to. 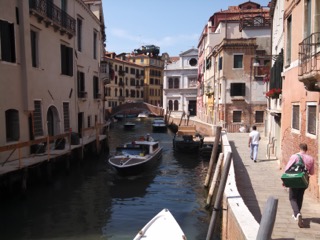 Having walked across the length and breadth of the City, my aging legs began to fail me, so eventually I collapsed into a Bellini. That is, I fell into a chair at a cafe that specialized in Bellinies (?). (If the plural of Bellini is Bellini then shouldn’t the singular of Bellini be Bellino?)

Pookie and his Bellino

After this short rest, I staggered back to the train station taking one last photograph before I left. 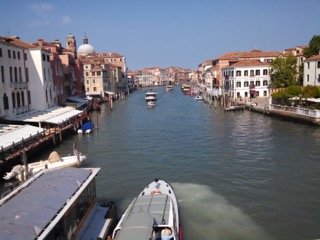 On the train, I mused about the many more artworks and innumerable musical performances and movies included in the Biennale that I had not seen or experienced. But, I contented myself with the knowledge that checking off an item on my bucket list is not that bad a day at all.

I arrived back in Sacile at dusk, tottered over to Lucia’s and drank glasses of Prosecco until Vittorio arrived to drive me back to Tamai.

Postscript: In the Andorran display (yes there is an Andorra and it has at least one artist) hidden somewhere among the haunts of Aurelio Zen, I saw this broom leaning against a wall. It was not the exhibit but could well have been.

“There have been three periods in the history of Western Civilization during which we have been overwhelmed by lawyers and judges, who tell us again and again that we cannot do certain things because they are illegal, even if those things are absolutely essential. The first period would be from 1313 to about 1480; the second was from about 1690 to the French Revolution; which was a revolt against a mass of confused, legalistic rigidity preventing necessary reforms. The third is our own day, when judges and lawyers are running everything and we are obsessed by legalism and litigation.”
Carroll Quigley Ph.D. Public Authority and the State in the Western Tradition: A Thousand Years of Growth, A.D. 976 – 1976.

“Most wealthy individuals are scoundrels. Only very few admit it and they usually are already in jail.”

When tempted to fight fire with fire, remember that the Fire Department usually uses water.

* A pile of paraprosdokians is called a stand-up comic.

The frost has known,
From scattered conclave by the few winds blown,
That the lone genius in my roots,
Bare down there in a jungle of fruits,
Has planted a green year, for praise, in the heart of my upgrowing days.

Written by Dylan Thomas when he was only fourteen years old.

“Republicans continue to refuse to extend [unemployment insurance]. You know what, I am beginning to think that they’ve got a point. If you want to get paid while not working, you should have to run for Congress just like everybody else.”
Barak Obama