A. POOKIE’S ADVENTURES IN MENDOCINO:

After a long, tiring and mostly uneventful trip back from Thailand, I met my sister in San Francisco and she drove us to Mendocino where I slept my jet lag away.

The next day Annmarie and her husband Dean, my grandson Anthony and Irene a relative from Sabina spending a few weeks in the US arrived. Anthony is having a difficult time. Arrested again for operating his marijuana business, he is in a lot of trouble.

Later that night my other grandson Aaron arrived. On the way up he crashed his car into the back of another car that had that had stopped in the middle of the road having struck and killed a large deer. Aside from that, he seemed in good spirits and happy about his burgeoning career as a chef.

The next day we visited Glass Beach in Fort Bragg. While walking along the path someone going the other called out to me, “How’re you doing Pops?” I was not amused. 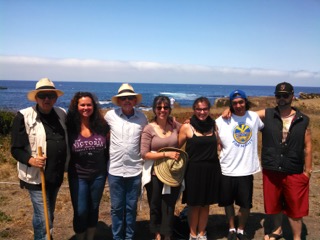 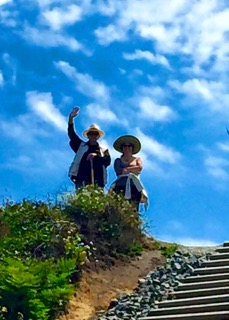 Later we attended the Art and Wine show at the Botanical Gardens. The Gardens were a Coastal Conservancy project during my time as director. It was in danger of closing down. So, since it was considered a significant coastal resource for the area, we developed a plan for its preservation enabling it to redesign and reconstruct its physical plant and exhibits and to purchase a large parcel extending to the coast. 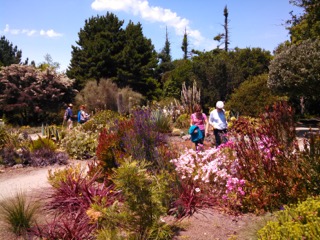 There also was music to go with the art and wine.

On Sunday, we went canoeing on Big River. It tired me out so I skipped lunch and took a nap. 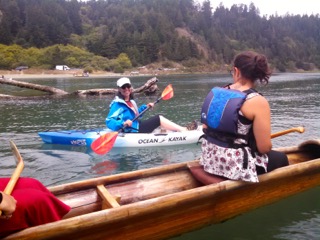 Finally, I returned to the Golden Hills and things ground to a halt.

My sister dropped me off at the Trans-bay Terminal and after a riding a bus, a train, the light rail and another bus I arrived at EDH Town Center three hours later. The house was still over 2 miles away and there was no way for me to get there except by walking and dragging my luggage (Mr. Suitcase) behind me.

I looked like a homeless old man searching for a place to sleep. I hoped that that image would so horrify the citizens of EDH that they would call the police who would arrest me and then, after I convinced them I belonged there, would drive me home in an air-conditioned police car. No such luck, so I struggled for another hour and a half walking with Mr. Suitcase, trudging from one bit of shade to another until I arrived home. I then took a nap.

The next day Dick and HRM arrived from Thailand. Since then I’ve returned to my usual routine — Drive H to school, eat breakfast at Bella Bru, go swimming, return home and play with the computer, pick up H from school, eat dinner and go to bed.

Today I met an old retired man from India. I was enjoying a cafe latte in the Starbuck’s at Target while waiting for H to shop for school supplies. The man sat down at the table where I sat. He was waiting for his family to finish shopping. He told me he spent half the year in New Delhi and the other half in the Golden Hills. He said that he used to be a sociologist and, although he now was retired, he sometimes still is called on to lecture about the differences between US and Indian culture. He said he often seeks out Americans to talk to in order to learn more about our culture. Then he said, in words to the effect, “Being old in America sucks. I have to hang out in this Starbuck’s in order to find someone to talk to.”

I have a new phone, an iPhone 6. It frightens me. 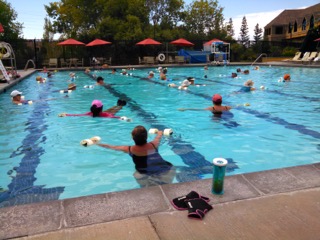 This week the trees with the red flowers were in bloom throughout the subdivision. As I have mentioned before, the landscape architect for the various subdivisions did a marvelous job in siting trees that bloom in different colors throughout the year delighting those with little going on in their lives and annoying many others who suffer from pollen allergies.

HRM report: Back in school in fifth grade. Currently, he is focused on his Youtube activities, “The Haystack Show.” He is the Chairman of the Board, Director and Star, his friend Jake is the CEO, Producer, and Editor. 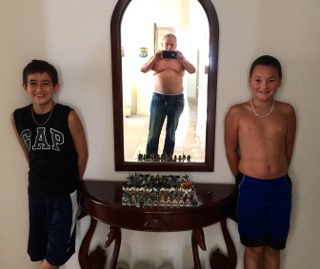 HRM, Pookie and Tyson HRM’s friend but not the CEO of “The Haystack Show.”

I find that spending my time with 10-year-olds is a rewarding and enjoyable as traveling around the world.

Alas, the pump that pushes the house’s wastewater up to the sewer that runs along the street broke requiring HRM and me to spend the nights until it is repaired in the Holiday in Town Center and eating in some of HRM’s favorite restaurants, MacDonald’s, Taco Bell and Panda’s.

I cannot believe I am reduced to writing about broken sewer pumps and Taco Bell.

Since I have returned to EDH my cuisine choices have been limited to McDonalds, Taco Bell, Panda and the snack bar at Target.

Sometimes we go fishing at the Duck Pond. Where I lie on the grass and stare at the sky until I fall asleep but usually I do nothing.

I guess I can report that the drought resistant spiders are back and have covered with webs the landscaping for the houses on the street prompting the migration of itinerant pest control experts knocking on our doors and promising to remove the pests in the most environmentally safe manner possible. I assume if that were true, they intend to pick up each spider individually and crush it between their thumb and forefingers.

Earlier this month when a bomb blew up in Bangkok near a much-revered shrine killing almost 20 people and injuring almost 100 more, the unelected Prime Minister and leader of the country’s most recent coup said that it was an attempt to injure Thailand’s tourism industry, while completely omitting any expression of sympathy for those killed or injured.

“We usually think of Christianity as the great contrast to the Roman ideology, but this is to misconceive the whole civilization. Christianity as an organization was in no way incompatible with Romanism as an organized structure. The teachings of Christ were, but these teachings were so very alien and strange that no one took them very seriously and being a Christian soon meant, not belief in Christ’s teachings but belief in Christ, a totally different thing. The same thing happened in Islam where Muhammad’s teachings were soon ignored, and the requirements of Islam became a few rituals, plus monotheism, and so far as Muhammad was concerned, belief that he was the Prophet of the One God.

The Christians cut down Christ’s teachings to a minimum also, insisted only on the belief that Christ was the Son of God and some related beliefs and certain rituals, and then began to engage in violent controversy on minute details of implications of these, very remote from Christ’s teachings or attitude. On this basis, there was not much in Christianity which could not be reconciled with the Roman system, and the original enmity between the two came more from the Roman side than from the Christian.

…The willingness of the Christians to become part of the Roman system can be seen in the present survival of the Roman Catholic Church as a copy of the Roman empire, a system organized in municipalities and provinces under an absolute ruler who uses the robes, nomenclature, language, and modes of action of the late Roman empire.”
Carroll Quigley

“When I won my Best Screenplay award several years ago, I had the great pleasure to see a number of films. One short film in particular caught my eye. It was a musical comedy called “West Bank Story,” and . . . you guessed it — it was a take on “West Side Story,” but set on the West Bank in Israel. I laughed so hard, I triggered muscle spasms in my back, and I had to go home and lay on a hot moist heating pad. It didn’t win, which I considered an enormous injustice, but I kept in touch with the film maker, a tremendously talented guy named Ari Sandel.

I saw it was nominated for an Oscar in the live action short film category, and I called Ari and arrogantly proclaimed that he would get an Oscar before Martin Scorsese would, and he DID . . . by about 2 hours! The Live-Action Short Film award was announced very early in the broadcast, with the major categories, like best actors, director, and picture of course saved for the end.

Now I see that Ari is dating actress Julianne Hough. Some guys have ALL the luck! Hey, Juli — for once, what about dating SCREENWRITERS, huh???

But if you purchase it, Ari is donating all proceeds to a nonprofit in the Near East that benefits victims of the violence — Israelis AND Palestinians.”

I think this animal rights thing may have gone too far. I mean, what’s wrong about a tiger living in a zoo in a place made to look like the jungle it’s never seen and free from scratches and annoyances of the wild, where someone else catches, slaughters and cuts up his food into bite-sized bits while people pay good money to watch him lie around and yawn? Wouldn’t this make him a Kardashian?

After all, humans in their natural state were made to huddle around the entrance of a cave and be periodically culled by Saber Tooth Cats and Cave Bears — not working 80 hours a week in order to afford to live in a fake greek revival house far too large to ever be fully used with a new Ferrari parked in the driveway that inevitably his doped up kids will drive into a tree.

The frost has known,
From scattered conclave by the few winds blown,
That the lone genius in my roots,
Bare down there in a jungle of fruits,
Has planted a green year, for praise, in the heart of my upgrowing days.
Dylan Thomas wrote this when he was fourteen-years-old. He remained blindly arrogant and mostly drunk for the rest of his life.

E. The Dictionary of Obscure Sorrows

n. Weariness with the same old issues that you’ve always had—the same boring flaws and anxieties you’ve been gnawing on for years, which leaves them soggy and tasteless and inert, with nothing interesting left to think about, nothing left to do but spit them out and wander off to the backyard, ready to dig up some fresher pain you might have buried long ago.

“Republicans continue to refuse to extend [unemployment insurance]. You know what, I am beginning to think that they’ve got a point. If you want to get paid while not working, you should have to run for Congress just like everybody else.”
Barack Obama