I guess it is about time in these emails for another edition of “The Hayden and Pookie Saga.” For the past week or so SWAC has a considerable amount of time rationalizing why I should not be permitted to see Hayden. However, due to Hayden’s insistence on spending time with me when Joey is not around, and her absence of acceptable baby-sitters, again when Joey is not around, Hayden and I have found ourselves sharing a number of adventures appropriate for an old-man and a young boy, like toy shopping, inventing nonsense songs and splashing each other in the pool. A few days ago, however, the first official document from the court regarding the custody hearing arrived along with an attorney’s retainer agreement. The court document contains a record of the complainants statement to a child protective agent. Now, I am perhaps the last person in the world to commend SWAC’s child rearing abilities or mental balance, but this person seems  a menace to society. Not only did he lose visitation rights to his daughter by a prior marriage regaining it only after the woman committed suicide, I suspect encouraged by his harassment, but he claims that although he had not visited or sought to visit the boy for five years he has evidenced his paternal devotion by recently been sending him emails every day. In reviewing those emails, they appear to consist primarily of this man urging this young boy of 6 of 7 to become a Republican because Obama and the Democrats are scum (remember this guy is a Federal government employee). Hayden told me that during one of his visits to this man, he wanted to shave Hayden’s head so that he would look more like a man. Another time he threatened to cut Hayden’s eyelashes because they were too long and made him look like a ladyboy.

Suddenly, I find myself in SWAC’s temporary good graces, because I might be able to testify on her behalf. I have never been that good at lying under oath but in this case if need be, I may make an exception.

For the past two days Hayden and I have shared a hotel room and spent our time swimming, watching National Geographic television programs generally featuring large animals killing and devouring smaller ones or making up silly rhyming songs.

My on again off again travel plans are on again. We plan to depart for Italy on the 14th remaining there for about two weeks. Nikki and I have discussed taking Hayden with us on a brief trip to Sicily, taking the overnight ferry from Naples to Palermo.

On the 38th or so of July we will travel to NY where I will spend about five days. I hope to be able to visit with Terry and with my daughter Jessica. I would like to get all the way to Williamsburg and see Ann but I am not sure I have the time to do so.

Another possible change of plans: Since I wrote the above, it seems that the both the Italian and the NY portions of the trip have gotten much briefer so I am contemplating skipping them on this trip and going directly to SF in early August. This will allow me to spend some time with Gates who is in Thailand for two weeks and with another friend and her son who is visiting until the end of the month.

On again, off again:

It seems as though the so-called national reconciliation proposals suggested by the current government that would have in effect pardoned everyone involved in one way or another with the events surrounding the various coups of the past few years including Thaksin the Terrible, exiled, fugitive ex-Prime Minister and according to the opposition party de-facto ruler of the country are to be abandoned by the ruling party because the opposition strongly objects to the fugitives return. So it appears that the oppositions approach to reconcile the political division that has kept the country in political and economic turmoil for almost a decade to do nothing and see what happens has prevailed. The Red Shirts will not reconcile without the man who led them to victory and the opposition will not reconcile with him.

It sort of resembles the US Republican Party‘s approach toward dealing with the nation’s unemployment crisis. They will do nothing for the unemployed if it may assist in Obama’s re-election, and Obama alas, insists on running.

1942 June: Friedrich Paulus WWII German general wrote to the corps commanders of VI Army on the Eastern Front in Russia:

“Recently numbers of reports have come to my attention and that of the higher leadership in which division commanders have described the condition of their divisions with extreme pessimism. This I cannot tolerate.
The personnel and material deficiencies afflicting the divisions are well known to the higher leadership. Nevertheless, the higher leadership is determined to carry out its intentions in the eastern theater of war to the full. Therefore it is up to us to get the most out of the troops in their present condition.
I request that you exert influence on the division commanders in this sense.”

Brad DeLong commented, “Can anybody imagine a worse commander than Friedrich Paulus? To announce before the start of the campaign that you do not want to hear about reality…”

2012: An analysis by the Annenberg Public Policy Center, founded and funded by the long time backers and supporters of Republican and conservative causes, Annenberg family, conducted for the Center for Responsive Politics found that from December 1, 2011 through June 1, 2012, 85% of the dollars spent on presidential ads by four top-spending third-party groups known as 501(c)(4)s were spent on ads containing at least one claim ruled deceptive by fact-checkers at FactCheck.org, PolitiFact.com, the Fact Checker at the Washington Post or the Associated Press.

All four were conservative and Republican oriented third-party groups and associated with Karl Rove, the Koch brothers and other well know conservatives.

Not a single deceptive claim was found presidential ads put out by Democratic Party organizations. This is hard to believe.

Alas, it finally happened as it had to happen, the Sauna Nazi, decided to bump chests with me and scream because I put my bathing suit in the sauna to dry (as does almost everyone) so I punched him in the jaw. He staggered back and did something almost comical, he started dancing around and flicking out his leg like some asian martial artist expert. As expected, the health club security intervened before things got further out of hand. After things quieted down they wanted to know if I intended to press charges. I declined, but requested that they instruct him in the value of the word, please. I am amazed at how much pleasure I get, even at seventy-two, from involving myself in adolescent male adventures in foolishness.

Hayden asked me if that was how attorneys do it; insult their opponents in court before throwing punches. I explained that we generally refrained from the physical part, but that slander and defamation are our stock in trade. He said he still wanted to become an airline pilot when he grows up. 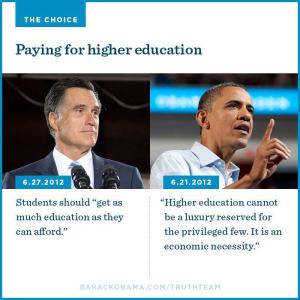 Alas, even though I am sympathetic to Obama’s statement, this is just a political piece. Romney’s statement is reprehensible for ignoring the need for Americans to be prepared with the knowledge and training to meet the future challenges to the nation. To some extent he seems almost Un-American in his abandonment of our children’s future. America’s public education system has been one of its proudest accomplishments.

On the other hand, Obama is disingenuous in that he avoids mentioning where he will get the resources to properly educate the next generation of Americans. Even if the Republicans stop trying to destroy our nation in order to defeat him, any resources freed up will have to go initially to rebuilding the economy, debt repayment and rehabilitating the nations social and physical infrastructure after years of neglect by Republican administrations.

“As the Government of the United States of America is not in any sense founded on the Christian religion; as it has in itself no character of enmity against the laws, religion, or tranquillity, of Musselmen (Muslims); and as the said States never have entered into any war or act of hostility against any nation, it is declared by the authorities that no pretext arising from religious opinions shall ever produce an interruption of the harmony existing between the two countries.”

“Christianity neither is, nor ever was a part of the common law”

“Take your inspirations where you find them.”