2011: In the United States, John Boehner took over as speaker on the House of Representatives and soon after the Weiner affair commenced, proving once again the domination of American politics by men’s obsession with their sexual member.

Not only that, but if truth be known, it really was all about size. Boehner (which spell checks as boner) and the Republican Party were so astounded by Weiner’s sudden prominence that they demanded Weiner’s withdrawal before the public began expecting the same eminence of all politicians (that would unfortunately put the Republican party at a disadvantage). Unhappily for Boehner and the Party, a recent poll indicates that the public once having seen it, are having difficulty forgetting the Weiner.

TODAY’S NEWS FROM THAILAND AND ITALY:

The political party of the “Red Shirts” have won a substantial victory in the Thai elections, garnering an absolute majority in the legislature. It now remains to be seen how the current military leadership will react. While the élite troops stationed in the eastern provinces of the country will probably remain loyal to their leadership, the vast majority of the ordinary soldiers in the army are probably supporters of the “Red Shirts” and probably could not be relied upon in a coup.

Although I expect that the current military leadership will hesitate taking any immediate action but will concentrate on fomenting civil unrest allowing them to step in at a later date “to restore order,” they must be cognizant that this time the new government may more careful in their actions, undermining the Military’s long-term power.
Since I am returning to Thailand on Thursday, I would be fascinated to know if I will me met with a coup in progress.

Between their horrendous defeat at Caporetto and the stabilization of the new defensive line on the south bank of the Piave River, the italian high command decided that the strategy of driving the troops into battle through fear (by, for example, shooting any trooper who waivers during a charge) was not working and instituted the tried and true motivation for young men to risk death, an abstraction, in this case patriotism. So, learning from their allies, they cranked up their propaganda forces, directed it at their own people and managed to assemble a new army, slightly more willing to die.

A little side note as to why the Italian government was so obsessed by this stretch of terrain, after all it was mountainous and arid and at that time produced little more than emigrants. The reason was that about 60 years or so ago the movement to reunify Italy (although there never had been an “Italy” to re unify) called the “Risorgimento,” envisioned the historical Italy to include everything up to the crest of the Alps and for some the Tyrol beyond. It also included western Slovenia where many so-called ethnic italians resided*. Apparently the idea was to restore some semblance of ethnic homogeneity (although the people of the peninsular were anything but homogeneous and to this day have little in common with each other except corrupt governance) and restore some aspect of the Roman Empire (although the old Romans never let anything as puny as the Alps stop them).

Also the people in this area were in constant rebellion against the efficient tax collection administration of the Austro-Hungarians, preferring the culture of tax evasion endemic to Italian society.

Anyway, Diaz, the Allied commander, rather than attack, gambled on the Central Powers exhausting themselves assaulting his increasingly strong defensive position. The Austro-Hungarian Central Command recognized that by waiting it would only give the Italians time to strengthen themselves further, struck on June 1918 attempting to force a crossing of the river. The blitz failed with their already stretched forces losing 100,00 more men.

Diaz had prepared a counter-attack should the assault by the Imperial Armies falter. On October 24, 1918, (exactly one year from the commencement of the festivities at Caporetto), the strengthened Allied Army punched, across the river and a few days later decisively defeated the Austro-Hungarian army near the town of Veneto (Veneto was later reamed Vittorio Veneto in honor or the victory and the date made into on one of Italy’s major patriotic holidays).

That same day, following the defeat of their army, the Austro-Hungarian Empire collapsed with Austria and Hungary forming their own national states and Czechoslovakia and Yugoslavia declaring independence.

The Imperial forces that had lost between 300,00-500,000 men, split in two like their countries and signed an armistice on November 3. The Imperial commander requested that the Italians terminate their advance since the Imperial Armies had already laid down their arms. The Italians were having none of that. They realized they were faced with an opponent that a military leader could only dream about, a non-existent army for a non-existent nation, and promptly advanced, occupied the Tyrol and Western Slovenia and settled down to await developments elsewhere.

The German Empire seeing its southern front dissolve almost over-night and recognizing that shifting a portion of their already beleaguered troops from the Western Front to protect their southern border spelled disaster on both fronts, sued for peace two weeks later. Although, the history books in the United States (and to some extent Britain and France as well) appear to claim that almost magically the sudden appearance of American troops in France futilely flinging their bodies on to German barbed wire caused the Germans to surrendered in terror, it was the collapse of the Southern Front that prompted the German high command to recognize that further resistance was futile.

*As a footnote to the Horrors of War, a little less than 30 years later following the collapse of the Italian Fascist State in 1943, the Yugoslav Army under Marshall Tito marched into western Slovenia and cleansed it of its ethnic italian population by shooting those who had not fled their homes in terror. In order, I guess to save bullets, those unfortunates who surrendered or were otherwise captured (about 20,000 in all) were tied together and marched to the mouths of several deep mine shafts where the first few were shot and toppled into the mine shaft pulling the rest of the wretches in with them.

Given the brutal imagination applied to ethnic cleansing by peoples everywhere (e.g., Throwing smallpox blankets into Native American towns, or slaughtering those Irish unwilling to die of starvation in Connaught, or machine gunning the Greek and Armenian residents who failed to depart their two thousand-year old ancestral homes quickly enough) one wonders if gas chambers were not more humane. Perhaps someone can propose a treaty in which only genocide by lethal injection would be allowed.

One day Vittorio invited me on an excursion into the Valcellina (Valley of the Cellina River) a small remote valley extending from the outwash valley of the Piave River to the edge of the Dolomite and the pre-alps. In its natural state it is virtually inaccessible, yet it has been inhabited for at least 10,000 years or more (Cellina is a pre Indo-European word still common in the mountains from the Pyrenees to the Carpathians). Throughout the millennia and up until the latter part of the 19th century , the Valley’s residents have lived much the same as they always did; hunting, gathering, wearing animal skins or homespun, starving, emigrating and selling their bodies or some rude handicrafts that they carried on their backs out of the valley across the mountains.

(It is interesting to me that sometime ago I had my DNA ancestry traced back on the female side [the Y chromosome tests had not yet beam perfected] to somewhere in the area north of Venice about 20,000 years ago. I like to think that there the ancestor of the Sicilian race and many of the Ashkenazi, plied her trade soliciting comfort for the traveler and breeding races and nations from the relative safety of this remote mountain valley.)

By the turn of the 20th Century a rough path had been hewn from the rock of the steep canyon walls. Then with the advent of Mussolini, a treacherous one lane technical marvel was constructed to allow workers into the valley to dam the river so as to provide electricity and irrigation to the arid but more populous Piave River plain below. The aqueduct and the electric transmission lines were buried beneath the road. The road also opened up the Valcellina itself, although less to augment the economy than to assist in emigration.

While the irrigation water and the electricity did much to begin to lift the region along the Piave out of poverty, it was the construction of the large American military base at Avieno the raised it to prosperity.

An American base, no matter how much we Americans view it relative to our national security, to the residents of the area in which it is located, it is essentially massive American foreign aid into the economy of the small region surrounding it.

Despite the American military’s attempts to provide for military personnel on base, the private consultants* as well as the teachers and other highly paid civilians for the most part preferred living in the life accommodating society of Italy rather than the life limiting environment of the base and thereby your dollars and what used to be mine benefit the happy citizens of Fulli.

Anyway, Vittorio and I travelled into the valley along the new road built recently to accommodate tourists that replaced the old one. We turned off on to a limited stretch of the old (most of it now only accessible to hikers and bicyclists) to visit an old osteria built almost 100 years ago to service travelers along the old road. It perches on a small ledge on the sheer walls of the canyon and has a parking area that can accommodate only about 4 small automobiles. It was empty of customers. Its proprietor was a tall thin young women, taller than I, with a traditionally large nose and a suspicious large Adam’s apple. We had a drink of wine and she told us that she had a hangover from drinking all night at the little town of Barcis that we planned on visiting. (To be Continued)

Pookie the intrepid at Barcis in Valcellina (Do I look presidential?): 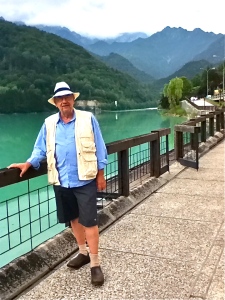 Barcis the picturesque (Yes, the water is that color): 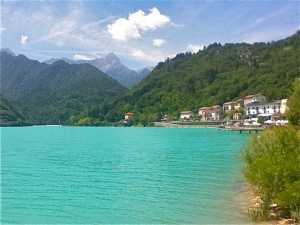