A. POOKIE’S ADVENTURES IN LOMBARDIA:

I spent the night in Nikki’s apartment in Busto Arsizio, a nondescript residential suburb outside of Milan. 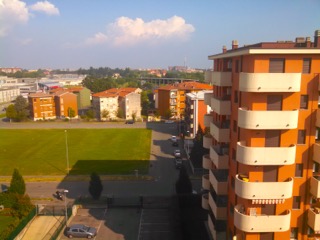 It took a day to sleep off jet lag after which we went to the International Food EXPO being held in Milan until October. If you get a chance, you should go also. It is fabulous. What is more enjoyable than a festival celebrating food and wine? It’s also gratifying to attend an international exhibition that replaces “my technology is better than yours,” with, “welcome, eat my food and drink my wine.” 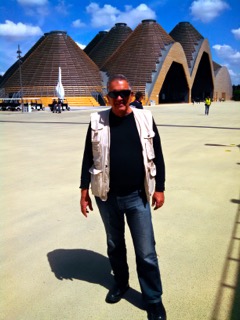 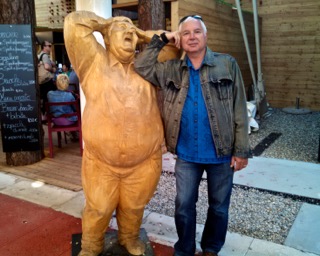 The exhibition is immense. A large covered promenade extending well over a mile lined with pavilions featuring form over function architecture (buildings with no conceivable use) formed the focal center of the EXPO. I especially appreciated, given that my aging legs soon gave out, that the whole fair was amply supplied with places to rest, to sit or lie down and, of course, to eat and drink. 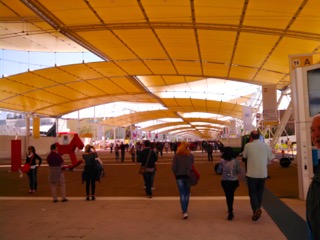 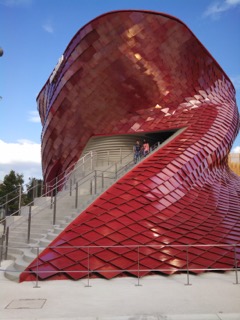 In the twelve hours we spent there, we were able to visit only about six or so of the national pavilions.

At the Czech pavilion, we drank some excellent beer. The pavilion seemed to be one of the party centers of the fair. In front was a large shallow pool surrounded by beach chairs on which fair-goers would sit in the sun sipping their beer. Late at night, tipsy young people would jump into the pool and splash around. Nobody minded. 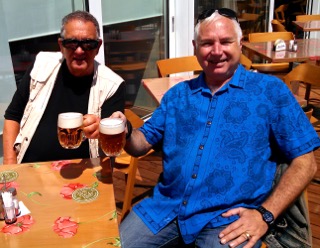 At the Czech Pavilion

The Rumanian exhibit featured a log cabin on the roof of the pavilion at which Nikki and I sat, ate some Rumanian native foods and drank a bottle of strong almost black Rumanian wine. 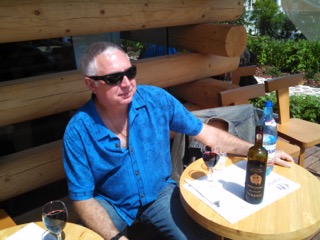 By the time we got to the Turkish pavilion, I collapsed in a small gazebo type structure with a fountain in the middle where I slumped comatose on the pillows until Nikki revived me with some strong Turkish tea.

We, also visited the USA pavilion (mostly meh!), the Brunei Pavilion, Slovenia (more beer) and one or two others. The various Arab pavilions, which we did not visit, seemed very popular, but I was told they did not serve food or wine. What they did in there I never found out.

By far my favorite place was the immense EATALY pavilion. EATALY, the company that builds and operates emporiums featuring Italian regional foods, created a site containing about 20 restaurants, each featuring foods and wines from a different region of Italy, along with a fabulous collection of artworks. Food, wine, and art, what is more civilized than that? We ate lunch and dinner there and drank lots of wines, Prosecco, Sauvignon Blanc, Chianti and a wonderful red from Piemonte. 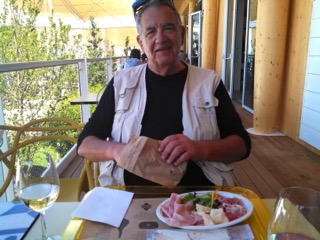 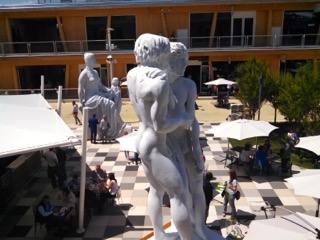 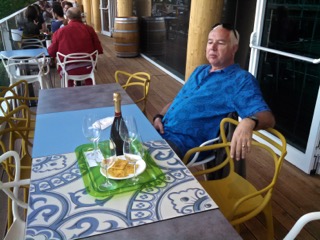 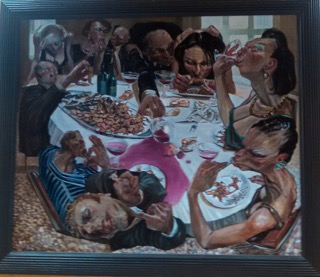 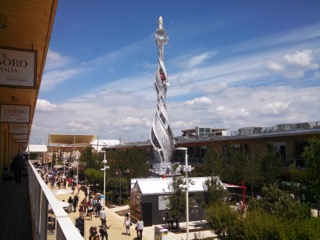 We met up with a friend of Nikki’s, the last Count Visconti. The great Visconti family ruled Milano from the Thirteenth to the Fifteenth Century until one of their sons-in-law established the Sforza dynasty. The Count’s father managed to eat, drink, whore and generally misinvest the family fortune leaving Marco, the present Count, penniless and forced to seek work. He is, along with Nikki, a pilot for Alitalia. He was accompanied by his girlfriend a successful attorney, her son a precocious six-year-old who, when tricked into it, speaks English without a noticeable accent and the Count’s daughter, an adolescent who knows her own mind. 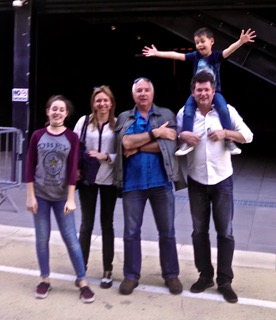 The Count on Nikki’s left, the lawyer on his right, the Count’s daughter and, the Little Prince, Giacomo, above.

The next day I took the train into Milan to meet with Marco Gallo. Marco is the son of my friend Luigi who lives in Sicily and who I expect to visit in about three weeks. Marco is a doctor of nutrition specializing in sports nutrition. He is deeply in love with an attractive young woman the way only the young can be.

We went to the Piazza del Duomo, where we had lunch at a superb restaurant specializing in Neapolitan cuisine. The restaurant is located in an alley off the piazza right next to the Galleria. Unfortunately, I do not remember its name except that it ended with the word Ciminio. 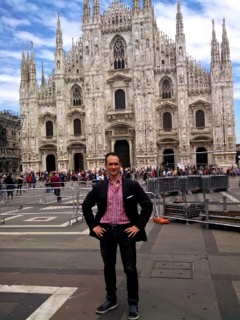 We at an excellent Mozzarella in Carroza and the most perfectly prepared Eggplant Parmigiana I have ever tasted in a restaurant. When I commented on it, Marco suggested that maybe Americans use the wrong type of eggplant for the dish. Sicilian eggplant has either more or less water, I do not remember which, than other types. We finished off with a Neapolitan pizza and of course espresso — the wonderfully thick kind from southern Italy.

After lunch, I visited Marco’s office located in the city’s canal district. As we passed through central Milan, I noticed a number of extremely tall, thin and unusually long-legged women rushing along the sidewalks. Although they were undeniably attractive, their thin bodies and exceptionally long legs made them appear deformed. When I mentioned this to Marco he explained that most of them were fashion models hurrying between photo shoots.

The canals of Milan long ignored and long derelict are being restored and a new urban waterfront is being created. 40 years ago, I lectured and wrote about the unrealized social, economic and environmental values of the urban waterfronts that most cities had turned their backs on or used for industrial sewers. Since then cities like Denver, San Antonio, New York City and a few others have enjoyed an urban renaissance along their waterfronts. Now Milan is having a go at it. Real estate prices have already sky-rocked. 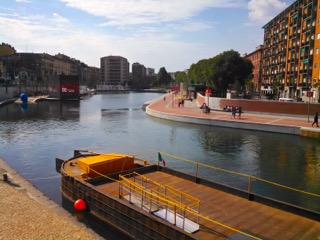 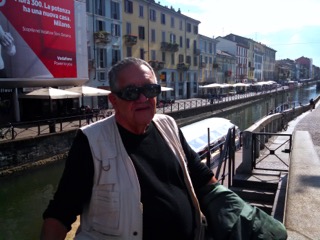 According to Marco, the original canal was designed by Leonardo da Vinci to carry Carrara marble from the quarries in Tuscany to Milan in order to construct the Duomo. From this bit of socialism emerged one of the sources of the West’s rise from also-rans to the economic and technological colossus that dominated the world for the next five hundred years.

Marco’s studio, located in the district, contains a consulting room, a waiting room and a small garden. While he met with a client, I dozed off.

We then left the office in search of one of the rent-a-cars (like Zip cars) parked around the city. On the way, we said hello to Marco’s friend, Italy’s arm wrestling champion who owns a vitamin supplement shop nearby. We soon found a car. They are operated by the national energy companies and are quite inexpensive. During the drive back to the train station Marco showed me some of the sights of Milan and demonstrated why he was at one time a championship race car driver.

The following day Nikki had an operation on his wrist for a cyst so I spent the day as his nurse, chauffeur and companion. 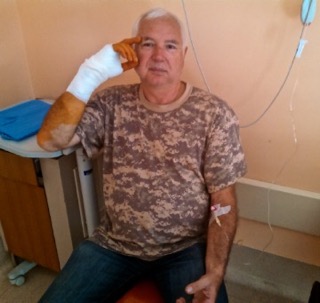 Then it was time to leave and head for Sacile, Venice and the Biennale.

B. POOKIE’S ADVENTURES IN VENETO

The train slid across the plains of Northern Italy — the Alps looming all dark gray and white on the left. I arrived in Sacile late in the afternoon.

Sacile is an attractive little city at the base of the Dolomite. A photograph of it adorns my Facebook page. During Venice’s heyday, the river that formed one of the main trade routes between the Venice Lagoon and the North passed through Sacile. The series of rapids located there required trade goods be off-loaded and transported by land above the rapids. As a result, a port and town grew up around the portage. As often the case, first the workers moved into the village, then the merchants and finally it became a favored spot for Venetians themselves to locate their summer homes in an effort to avoid the miasmatic atmosphere of the lagoons. Eventually, it began to be called “Il Giardino della Serenissima.” 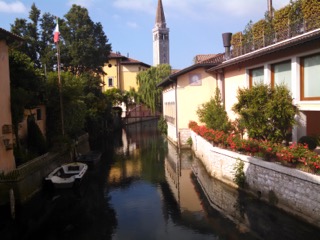 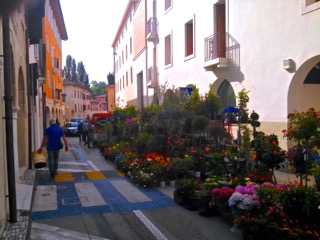 My friend Vittorio picked me up at the train station and we drove immediately to one of my favorite places in the world, Lucia’s bar, “Le Petite Cafe.” Some wines achieve greatness because of the quality of the grape, others because of the location of the vine, still others on the ability of the winemaker, here in Sacile the greatness of the Prosecco is based on the person who pours it into your glass and that person is Lucia who adds a lot of happiness to the wine. If I were asked to recommend places to see before you die, Lucia’s bar would be right up there among the top. 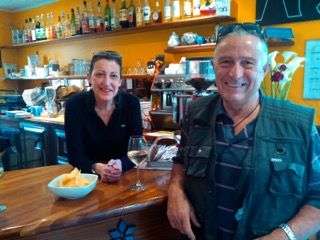 Vittorio, Lucia and I were joined by Professor Hank and a friend. Professor Hank is an economics professor at a college in New Jersey who used to also teach at the huge American military base a few miles north of here and lives part of the year in Sacile. Not only do I enjoy his company and stories but I appreciate his gentle and passionate belief that his economic theories (with which I, less gently but also less passionately, disagree) are a force for good.

After lifting very many glasses of Prosecco, laughing too hard and talking too loud, we said goodbye to Lucia and Hank and set off for Vittorio’s farm in the Village of Tamai where I was to spend the next few days.

The next day was market day in Sacile. I happily lost my way among the flower, fruit and clothing stands that lined the streets of the town until I turned down a quiet little lane that smelled of honeysuckle and found myself, not surprisingly, at Lucia’s bar. Vittorio, Professor Hank and a number of other aging American ex-pats and their Italian wives joined me there. After some espresso to clear my mind, we began on the Prosecco and talk until it was time to return to Tamai for lunch.

After lunch and a brief nap, I walked around the small farm and spent some time talking to the chickens before returning to the house, sitting on the porch and for the next few hours staring at the traffic passing by. 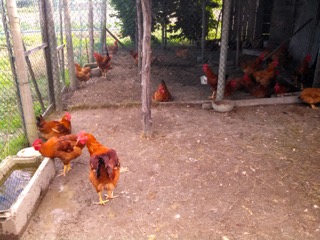 “The economic expansion of industrialization has been based on plundering the natural capital of the globe that was created over millions of years: the plundering of the soils of their fertility; the plundering of the human communities, whether they were our own or someone else’s, in Africa or anywhere else; the plundering of the forest. In 1776 the wealth of forest in North America was beyond belief; within 150 years, it has been destroyed and more than ninety percent of it wasted. And it had in it three hundred years of accumulated capital savings and investment of sunlight and the fertility of the soil.

The energy which gave us the Industrial Revolution — coal, oil, natural gas — represented the accumulated savings of four weeks of sunlight that managed somehow to be saved in the earth out of the three billion years of sunshine. That is what the fossil fuels are. This is not income to be spent; this is capital to be saved and invested. But we have already destroyed into entropy — a form of energy which is no longer able to be utilized — eleven or twelve days of that accumulated twenty-eight days of sunlight. And we have wasted it.”

“Public Authority and the State in the Western Tradition:A Thousand Years of Growth, A.D. 976 – 1976” by Carroll Quigley Ph.D.

“Lying to oneself is necessary for survival. If not, how would anyone make it through puberty? “
Trenz Pruca
C. Today’s Paraprosdokian*:

“You’re never too old to learn something stupid.”

*Paraprosdokian is a sickness that begins with a tickle in the back of the mind.

The sun sits
on worried wings
and soft sings
of dreams of fire
and ghostly things
with deep desire.

Without desire
for all those things.
he banks his fire.
Burned wood sings
through smokey wings
where he sits.

“Normal human behavior, honed during evolution, is to meet people in the village center — dancing, competing, gambling, sharing food, or just getting water from the well. Those are the people you invite to your house, not a stranger.”
Naida West